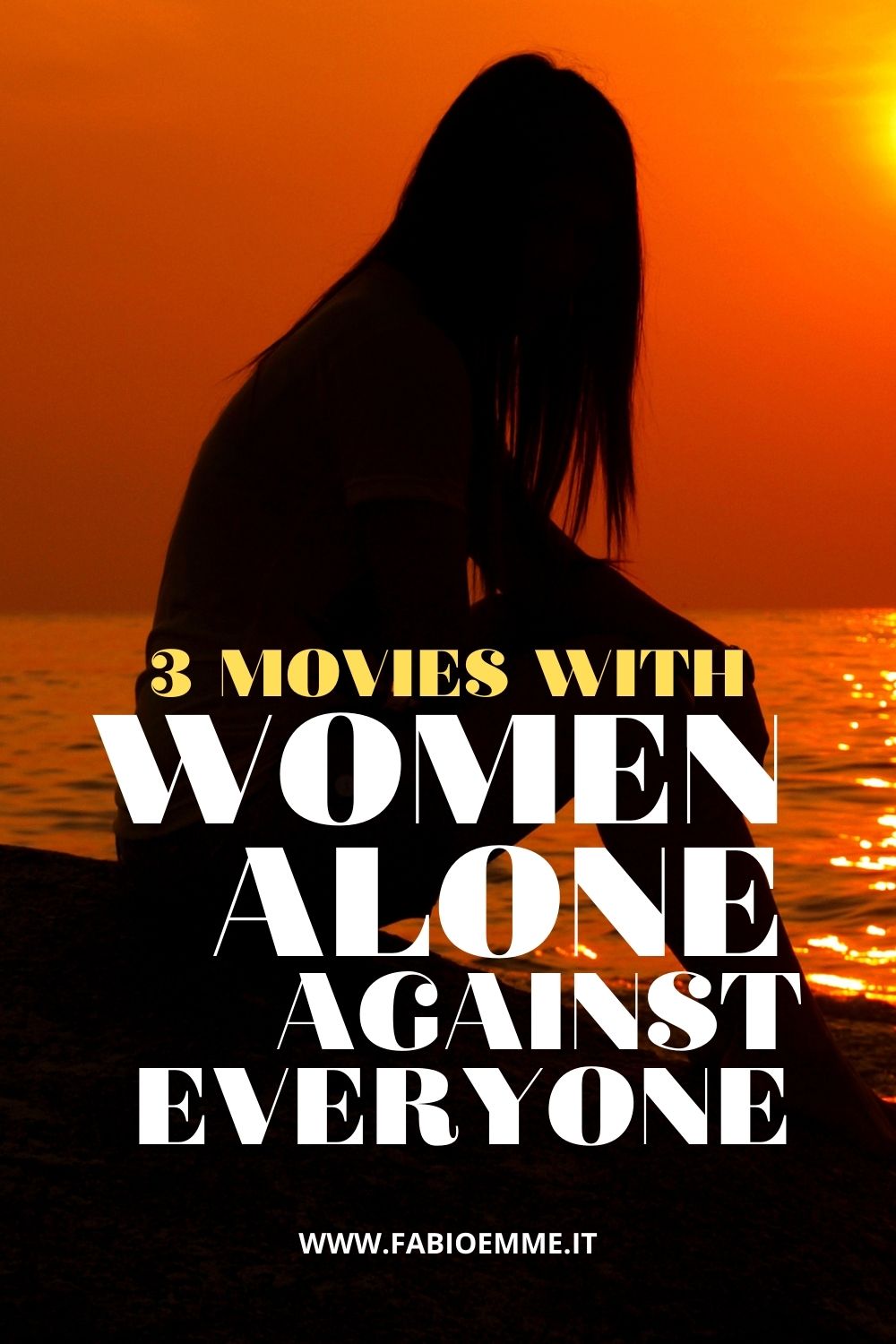 The world can be cruel to women who find themselves in trouble, forcing them to bring out a strength they didn’t even suspect they had.

Three movies with women alone against everyone, three occasions to discover the unexpected hidden female strength.

The Gift is the story of a psych living in a small community. Hated and ridiculed by most people, she’s a woman alone against everyone.

But the woman has her loyal group of clients who rely on her predictions, including the abused wife of a violent racist yob.

The man repeatedly threatens her, furious because he believes she is advising his wife to leave him.

But one day, the psych has a vision of a murder. Leading the police to his property, they find the body of a recently missing girl.

The man ends up in prison and, once the authorities discovered he has an affair with the victim, the court severely condemns him.

But the woman begins to doubt she has led the police to the wrong man.

Alone against everyone again, she fears the real killer is still around and wants to shut her mouth forever.

The Gift is an exciting fantasy thriller with a wonderfully magical atmosphere that always hovers on the whole story.

The investigative part has good narrative twists and fits perfectly into a small rural ecosystem made up of prejudices, ignorance and racism.

Cate Blanchett is a great leading actress, achieving with her beauty and fragility to be credible as a woman with bless/curse of the gift of foresight.

Besides being ostracized by her fellow citizens, dreams and ghosts perpetually torment her from the past.

Keanu Reeves plays the villain’s role, a violent and ignorant man with whom it is impossible to reason.

However, the famous actor fits perfectly in the unusual role of the evil villager.

Hateful and grumpy against everyone, the man also repeatedly mistreats his wife, played by a young and talented Hilary Swank.

In his fight against the psych, the man will have to deal with the disturbed character of Giovanni Ribisi.

He plays a man with a painful past, working as a mechanic in the village, and whose protagonist is his only friend.

Finally, beautiful Katie Holmes is the murder victim. About to marry the sober and elegant Greg Kinnear, the girl disappears without a trace.

Initially, his man is desperate and lost, but then he and the psych begin having stronger feelings for each other.

With this movie, Sam Raimi is looking for success after the expensive flop of For Love of the Game.

Thus, the brilliant director returns to a comfortable genre with a magic story with small and skillful horror moments.

Thanks to the proficient cast, he builds a credible small-world functional for a woman alone against everyone’s thriller evolution.

It will be a good turning point for the director, getting back into the blockbusters by subsequently producing his famous Spiderman trilogy.

Anna is a poor girl with no future and a small and filthy criminal boyfriend.

The two live in squalor with petty thefts and drug dealing until one of their crimes ends in tragedy.

At that point, a man sent by the Russian government offers her a choice: die or become a spy.

She must face hard training and a trial of initiation to the impossible limit. By holding on and suffering, the girl succeeds in obtaining as a reward her first undercover assignments.

After many missions in which she demonstrates all her skills, the works become more critical and complex.

But one day, she remains stuck in a power game between some American agents and her compatriots’ colleagues.

Blackmailed by both sides, the beautiful spy will have to use all her intelligence and fighting skills. Playing in the shadow, the woman alone against everyone must try to escape the two secret services’ crossfire.

Anna is an excellent female espionage with daring action scenes and a series of characters ready to screw each other at any moment.

The spies’ world is exaggerated like a comic book, therefore fun and enjoyable without a complicated plot.

Sasha Luss is a splendid protagonist, young and immature at the beginning, then becoming a ruthless war and deception machine.

The actress gets along strong and athletic in the numerous action scenes, and she is also elegant and sexy in her modeling cover job.

The two spies Luke Evans and Cillian Murphy, will fight for her love, helping or exploiting her according to their needs.

They also relentlessly work to resolve an old bloody dispute between the Russian and American governments.

Finally, the wise Helen Mirren will be her mentor, helping her become a spy. Initially skeptical, the elderly former spy will begin to see herself in the young girl.

Luc Besson returns to his beginnings with this near remake of La Femme Nikita.

This movie doesn’t get to its old film’s sweet intimacy, but it is still far above the quality level of many other directors doing action espionage.

The French director was perhaps looking for confirmation, after Lucy and Valerian and the City of a Thousand Planets commercial results.

Anna did not give the desired results, collecting as much as its production cost.

However, it is an excellent example of entertainment cinema done with an experienced cinematographic craft, as far as I’m concerned.

Although many criticize him, I continue to admire Besson‘s fantasy and always look forward to his new movie releasing.

Young Adult stars a city woman, alone against everyone, returning to her hometown after knowing her ex-boyfriend finally married.

She left years ago because couldn’t stand the small, stuffy city atmosphere. Even more, she wanted to pursue her career as a children’s book writer.

The woman wants absolutely rebuilding her lost love with the man. He is always an obsessive pending business for her, who builds her books’ main character about him.

Thus she begins to reconnect her old contacts, introducing again to all the people she hasn’t seen for years.

Together with a cripple boy, the victim of an assault years before, they plan the seduction of her former-boyfriend.

But her drinking problems will bring down her feigned confidence. So, the strong woman will have to face her worst weaknesses in front of everyone once and for all.

Young Adult is a sweet and bitter mature comedy about the wrong growth of a woman. Unable to find direction in her life, she mentally still stopped in her adolescence.

Although she looks beautiful, intelligent, and has an excellent respected job, she also suffers from neurosis and loneliness.

Charlize Theron plays an extraordinary role, simple and complex at the same time.

Indeed, she initially appears like one of the many beautiful protagonists of an usual romantic comedy.

We slowly delve into her psychoses and insecurities, discovering her weaker and more lost than she appears to be.

The same goes for the funny character of Patton Oswalt. From the start, he also seems the usual comedy shoulder of the protagonist.

But he hides an atrocious personal drama that he never managed to overcome.

Together, they finally find something in common. A free ground where two outsiders can yet feel free from their lives’ weight, even if only for one night.

Instead, Patrick Wilson is the fascinating ex-boyfriend, who has always remained in the woman’s memory like a childhood obsession.

Together with his wife, Elizabeth Reaser, they struggle to understand the woman’s intentions, merely accepting her as someone they haven’t seen in a long time.

Jason Reitman directs one of the best American comedies of recent years.

Behind the entertainment’s facade, the director describes a woman on the verge of a nervous breakdown.

Ultimately this story is, in reality, a personal tragedy of a woman alone against everyone, cleverly disguised in a series of funny situations, with an unpredictable and stunning dramatic end.

It is, maybe, one of the many movies destined to disappear under the large number of comedies coming out every year.

For this reason, I would like to recommend it to all those who may never have gotten to know it and may have missed a small piece of genuine cinema from the last decade.