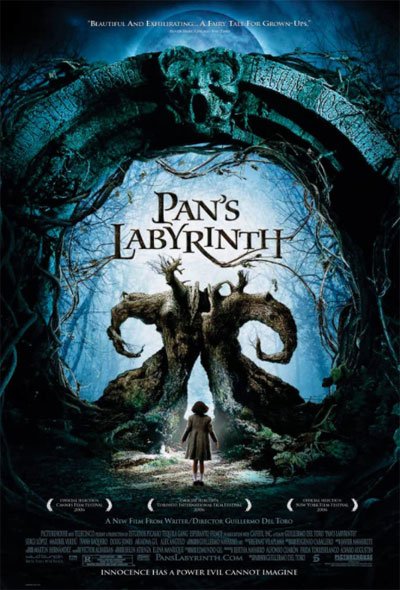 Pan’s Labyrinth is a story of the 1940s, during Spain’s regime. A little girl and her mother, alone after the father’s death, went to live with a violent Francoist officer.

Deeply disturbed by the cruelty surrounding her, the little girl will live her fantasy. Lost in the woods near the camp, where she often refuges, she builds her story and private world.

In this world, she is the Underworld Princess, fled in her youth and then died in our human world. But her soul has persisted, and now she wants to open a magic well that will bring her home.

Led by a magical Faun and his loyal flying fairies, she will have to accomplish a series of tasks.

Meanwhile, in the real world, the resistance rebels living in the woods are growing in numbers. In addition, the girl’s mother is about to give birth at any moment, facing serious health problems.

On one side, she will have to deal with the mysterious creatures in the woods’ magical labyrinth. On the other, she must face his ruthless fascist stepfather, increasingly dangerous and crazy.

When both stories reach their climax, the girl will be at the center of a pivotal moment for both worlds.

Pan’s Labyrinth is a brilliant dramatic fantasy in one of the darkest periods of Spanish history. The protagonist is the metaphor of life itself, nature, innocence and the joy of the imagination.

Indeed, the brutal, oppressive regime of Francoist Spain is the essence of life’s denial. It is a death’s machine embodied by the terrible Captain and his soldiers, unable to think or do anything different in blindly obey their superiors’ insane orders.

The girl is more afraid of men in military uniform than of mysterious creatures of the forest.

Then, when her stepfather realizes he is finally losing against the rebels, she will be the last line between the madman and her pregnant mother.

The great Sergi López plays the Francoist Captain. The actor builds a pure and distilled evil villain, mercilessly killing every intruder who wanders in the woods.

The man has no moral issues in oppressing the weak and defenseless populating his camp, who live in constant fear of his madness.

The creatures and the world invented by the director stay in memory for a long time after the end. They are beautiful and elegant and at the same time dangerous and fearful in their natural and mighty ferocity.

Pan’s Labyrinth was a vast commercial success, confirming the director’s golden moment after the big box office hits of Hellboy and Blade II.

However, his talent is not always rewarded by producers. For example, they denied him directing Hellboy 3, preferring to invest in a fairly funny but insignificant remake.

Del Toro, however, kept straight on his way, arriving again at the Oscar with The Shape of Water, another fantasy full of imagination and romance.

He is a great director who doesn’t follow the moment’s fashions, remaining faithful to his style and poetics.

For all this reason and because he made great movies, each of his films instantly become a must-watch when released in cinemas.