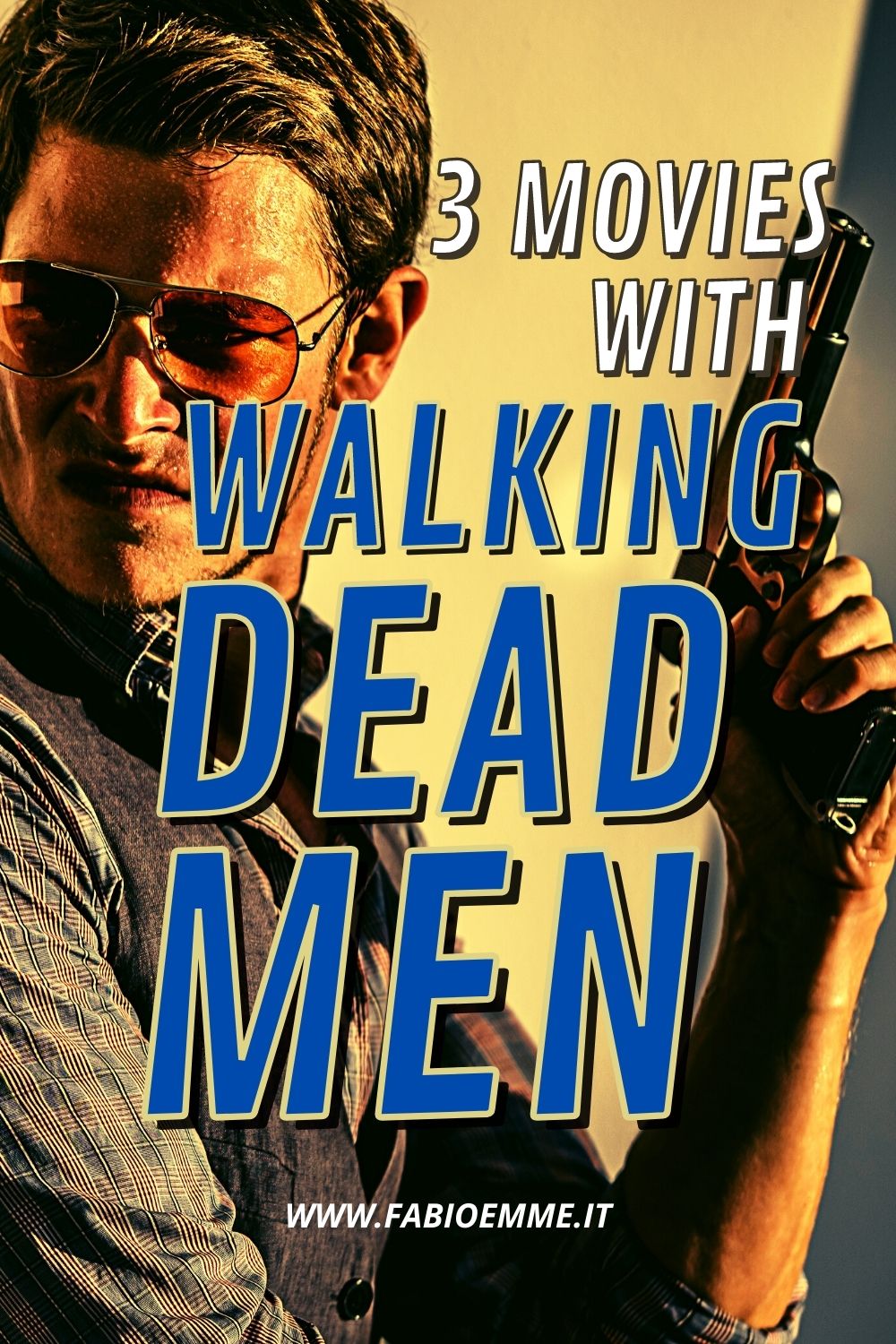 When a man has nothing left to lose, that’s when he shows who he really is.

Let’s find out what they do near their deadline, with these three Walking Dead Men to which it is better to don’t cross their way.

John Constantine has been one of the best exorcists of demons and spirits for many years. But now he is in his final days, being seriously ill with lung cancer.

Since he was a boy, he had a great affinity with angels and demons world. Obsessed with these visions every day, he lived a terrible childhood until he even attempts suicide.

But the suicide failed and he is condemned to hell by divine law.

In the short time he has left, he will face one of Satan’s sons. In league with some rebel angels, this demon would attempt to unleash the Apocalypse on earth.

With a policewoman whose sister is a demons’ victim, they must stop the impending countdown for the unwitting human race.

Based on Alan Moore’s comic, Constantine is a fascinating horror-action. It is full of ideas and fancy reworkings drawn from the Gospel and the Bible’s myths.

In this world, humans are mostly the victims of the crossfire in the hidden war between angels and demons.

The only fighting humans are the protagonist and his small circle of paranormal colleagues, increasingly weaker and fewer in number.

Keanu Reeves plays one of the best walking dead men in recent years.

The actor offers a dramatic intensity to his character. A cynical and disillusioned man knowing that, whatever he does, he will go to hell anyway in the end.

A hell where, moreover, he already has many enemies waiting for him, after hunting demons for his entire life.

Moreover, he also skills greatly in the various action scenes. Indeed, this movie is also full of spectacular fights against a varied assortment of demons, spirits, and miscellaneous monsters.

Rachel Weisz is just as good as a traveling companion in the hero’s latest adventure.

She is initially very skeptical, as a detective, about the man’s talents and considers him only a charlatan.

But she too will have to face the truth that she is powerful psych, like her sister, extremely desired by both factions to win the war between hell and heaven.

Finally, the rest of the cast is perfect in the protagonist’s various supporting characters and enemies.

For example, Shia LaBeouf plays his young helper, eager to jump into his first fight against demons.

In addition, with their secondary roles, Tilda Swinton is fantastic as the arrogant Archangel Gabriel and Peter Stormare as the amused and amusing Lucifer, angry with his child who wants to end the world.

Francis Lawrence diligently directs this movie, focusing carefully on the story and its characters despite the enormous and continuous special effects.

Constantine was a huge international blockbuster, despite being repudiated by the lovers and even the original comic writer.

A criticism that I understand in part, but nevertheless, it does not discourage me from recommending this movie as one of the most exciting horror-action in recent years.

D.O.A. is the story of a professor, formerly a successful writer, now in crisis with his job and his marriage.

One day he finds his ex-wife killed and a masked man suddenly hits and leaving him unconscious on the ground.

The police immediately transported him to the hospital, where doctors discover an extremely poisoning substance in his blood.

Without any possibility of cure and few hours left to live, he trusts no one and escapes. He runs to a young girl with whom he had a flirt the night before, deciding what to do next.

Together they start investigating his colleagues and students to find who could have reason to poison him.

A fight against time during which he will discover much more than he wanted to know about his beloved ex-wife.

D.O.A. is an excellent dramatic thriller, where unusually is the same victim investigating his own murder in the few hours he has left.

The plot is dark and intriguing, creating a world full of ambiguous suspects, all of them hiding unspeakable past secrets.

Indeed, he’s one of the Walking Dead Men I have most enjoyed in the many movies of my life.

Ironically, he initially has an adrift and lost life, starting to live again only when he’s sure to die within a few hours.

It will a frantic and romantic investigation, without a clear overall picture, appearing an inexplicable no-reason murder.

Meg Ryan is the only light of hope in this whole dark story.

She’s a student with a casual relationship with him and where he will take refuge later, after being poisoned and no longer trusting anyone else.

At that point, driven by the breathless flow of time, their night’s casual sex will become real love.

Finally, the always beautiful and mysterious Charlotte Rampling plays the rich mother of a student killed a few days earlier.

The boy was having an affair with the professor’s killed wife, and therefore the most significant police’s suspicions will fall on the protagonist.

The investigation plot is gripping until the end, with some intriguing (and fake) narrative twists and funny/romantic moments to lighten the general gloom.

The characters all have their moment of brilliance, and their questionable morals perfectly match the story’s pessimistic mood.

Although the two directors will not have such a significant career later, their collaboration in this movie is, on balance, entirely fulfilling.

D.O.A. wasn’t undoubtedly the greatest blockbuster of all time, but it still made good money with praise from the public and critics.

It is an honest movie that, with its particularity, has left me something unique, returning to see it several times over the years.

24 Hours To Live is the story of the best mercenary of a powerful and ruthless private agency.

After his family’s tragic death, the man retired and ended up living on a beach with his father in law.

However, a close friend and colleague convince him to return to the battlefield. Promising him a rich reward for a few days of work, they fly together to South Africa.

Their mission is to kill another ex-soldier who intends to testify against the agency. Before he reveals terrible secrets about his past work, they must shut his mouth with a bullet.

Flirting with an Interpol woman, he discovers his target location, but she shot him to death before communicating it.

But the agency brings him back to life with secret technology, giving him a further 24 hours to live.

On the last day of his life, he decides to take the weakest’s side in a war without rules or prisoners.

24 Hours To Live is a non-stop action movie with amazing fighting, shooting and car chase scenes.

Nonetheless, he has well-built characters with credible motivations, united in a war against a wealthy private military agency.

With irony, the private army’s primary intent is transforming its soldiers into a pack of walking dead men.

Ethan Hawke is charming as the invincible soldier with nothing left to lose.

The walking dead man immediately stand out as an ambiguous character with a sad past.

Moreover, the actor gives the right attitude to a man with no more ties who plays the last game of his life, against those being his friends and colleagues until the day before.

Qing Xu is initially his enemy and priority target, a beautiful rival agent from Hong Kong with whom he has a day-long love affair.

However, what was initially just a job will immediately become personal when the agency has her only child kidnapped.

The two must team up to fight the soldiers led by Paul Anderson, initially the protagonist’s best friend and quickly becoming his hunter and number one enemy.

Despite the money, even he will still have his moral dilemmas to follow his boss’s orders.

Indeed, the horrible businessman, played by Liam Cunningham, is responsible for dozens of desperate people’s deaths to accomplish the resurrection’s technology research.

Finally, Rutger Hauer also has a small role as the father in law of the protagonist.

It would be only a few minutes for the great Dutch actor, who still manages to conquer the public with his old wisdom and detached irony.

Brian Smrz smoothly directs his second movie, after a long apprenticeship as a stunt and second unit.

The action scenes are spectacular without becoming too exaggeratedly unrealistic, interspersed with small details to emphasize the various characters’ humanity despite the constant shootings.

The result is a movie that balances the personality of its roles well without wasting time getting into the action’s heart.

24 Hours to Live was a commercial flop in cinemas, definitely ignored by both critics and audiences.

A treatment that I find unfair for another honest entertainment show doing its job decently with a good plot, actors and efficient action direction.

So let’s all give him a second chance, in the hope that this director will continue to improve and have more luck with his next movies.