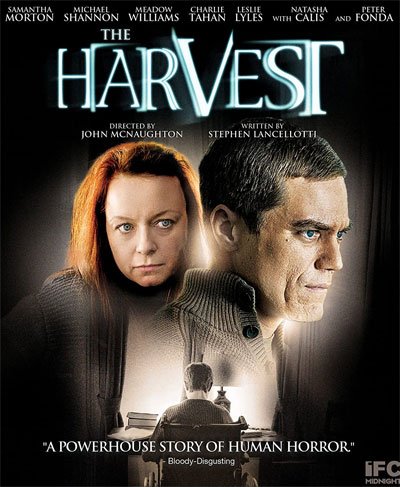 The Harvest is the story of a seriously ill boy living isolated at home only with his parents.

His mother is a doctor, always very busy with her work and out for most of the day. Instead, the father resigned is a former nurse job to look after his son all day.

Between the two parents, there is always strong friction on the therapy that the boy should follow.

Indeed, the mother, being a real doctor, rejects any suggestion of the father, who was just a simple nurse.

One day, a young girl appears at the boy’s room window, from which he watches helplessly at the outside world.

She just moved into the neighborhood and would like to become a friend to the sick and lonely child.

Repeatedly chased away by his mother, extremely nervous about her presence, the girl sneaks into the house.

There will be a terrifying secret waiting for her, trying to warn others of his discovery. But no one wants to believe her, even the grandparents she lives with now.

So the girl must to act fast, being the only hope for the young child, increasingly weak and defenseless.

The Harvest is a family drama slowly and inexorably becoming a thriller and almost horror in the end.

The apparently peaceful environment is overturned by an external person’s arrival, bringing to light the whole family’s terrible truth.

Charlie Tahan is the young protagonist of this drama. Inconsolable about his situation, the boy sees no way out of a house where he lives as a prisoner.

With no external contact and only a few pastimes, the situation will worsen when the girl snooping in his life.

The mother, interpreted phenomenally by Samantha Morton, will become crazy obsessive and uncompromising towards the boy.

She is so full of love and the desire to protect her son to become a terrifying nightmare. Trying to preserve the family’s hidden secrets, the woman changes profoundly into a dark monster.

Michael Shannon is equally extraordinary in the role of the father.

The man is tired and unable to sustain his home’s situation, which is continuously worsening due to his wife’s mistreatment and insults.

He also experiences a terrible moral conflict in the medical treatments inflicted on the boy without respite, which hides a terrible and secret ulterior purpose.

Finally, Natasha Calis plays the girl who will bring the beginning of the end into the whole family’s house.

After moving, she lives with her grandparents, Peter Fonda and Leslie Lyles, believing she lies about the strange family, not to admit that she feels alone in the new city.

John McNaughton directs with class and sobriety a drama locked inside the walls of a suburban house.

The story starts quietly with loving and tender characters between them, worsening over time almost to the psychosis of a mother unable to accept the reality about her son and his family.

It is a further demonstration of skill for a director we had already talked about for his excellent Mad Dog and Glory, which was instead a romantic comedy / crime.

The Harvest is a movie that I personally knew nothing about until recently, thanking lovehorror.co.uk for letting me know with their review.

It is a story that gives all space for the actors to show their talent, reciting a superb screenplay harmonized by a director who always has clear ideas on how to tell his movies with simplicity and effectiveness.