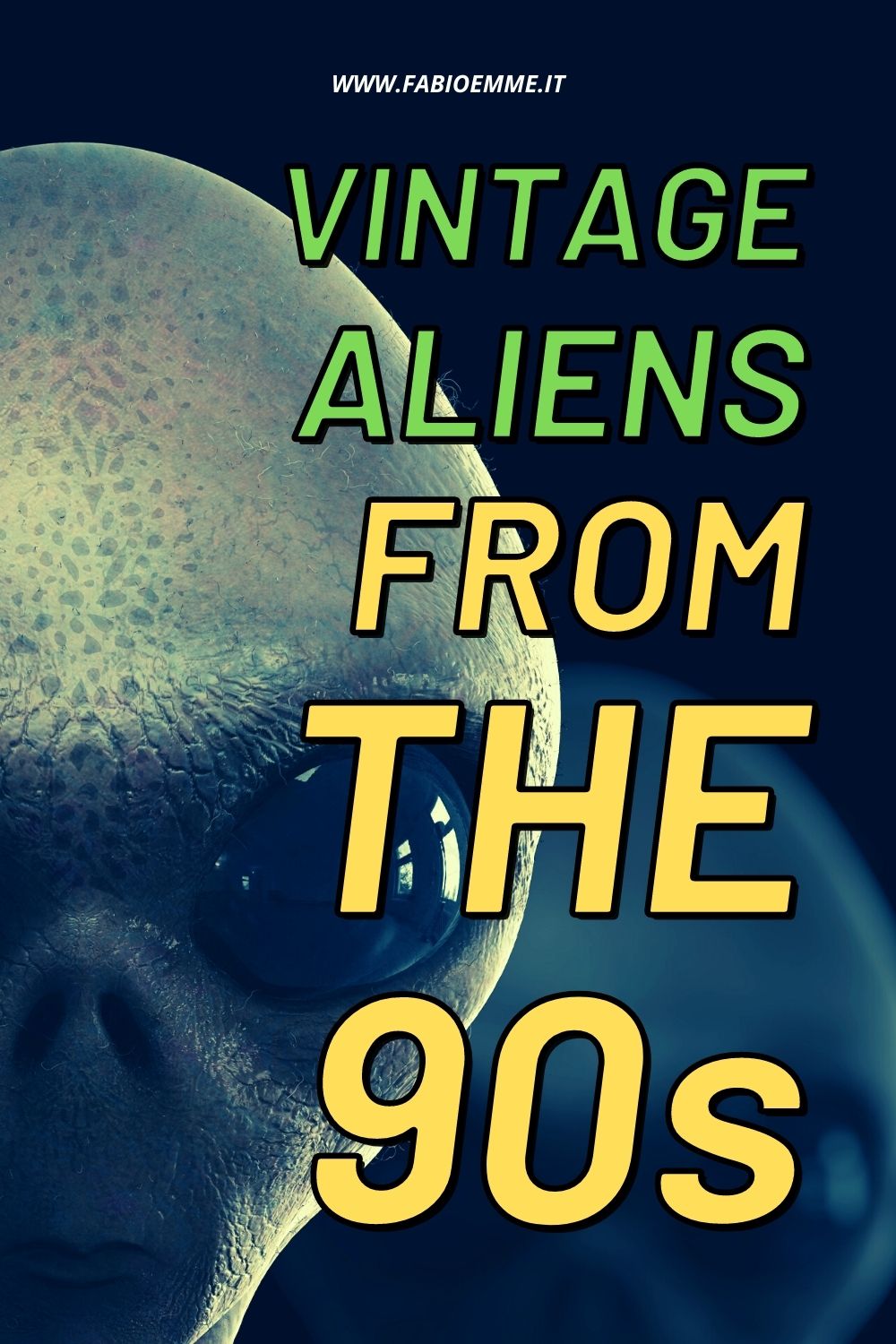 An unspeakable and mysterious threat comes from space… and also from the 90s, with 3 Vintage Aliens from the 90s that are a must-have for sci-fi lovers.

A group of criminals discovers an undercover cop during a drug exchange. Immediately, they kill him while his colleague is powerlessly locked outside.

When he finally arrives at the crime scene, the astonished cop must face an unintelligible massacre.

Indeed in the few minutes, he lost entering the building, a mysterious killer cut all criminals’ throats and disappear.

Thus, the policeman begins to investigate, flanked by an FBI’s young colleague for the extraordinary occasion.

When they find an unknown technology murder weapon, they begin to suspect something different than criminals’ business is happening.

They still don’t know a humanoid-looking alien has just landed in their city. He’s killing random people to suck endorphins out of their brains and produce a particular type of drug.

The two men will inevitably end up on a collision path with the space criminal. Left alone from everyone, they will have to face him without the police or FBI’s help.

Dark Angel is a mix of Sci-Fi/Action/Crime with two buddies against a Vintage Alien from the 90s.

As usual for this movie, the cop’s couple has the classic rebel policeman with the most severe and law-abiding colleague.

The idea of ​​turning human brains into a drug is intriguing and skillfully embedded in a drug dealers’ story.

Dolph Lundgren takes the lead role, building on his notoriety after Ivan Drago in Rocky IV a few years earlier.

The actor gets along well, being likable and not too exaggerated and unbeatable. Above all, he is athletic and elegant in the numerous action scenes where he shows off his martial arts skills.

Brian Benben is instead the sympathetic shoulder of the muscular hero. An FBI agent who never deviates from regulation and lives to serve his institution.

But when the feds turn their backs on him in time of need, he fearlessly launches the fight against the alien to the end.

Finally, Matthias Hues doesn’t have much dialogue other than his iconic I come in peace, ironically repeated every time before slaughtering his opponents.

However, the actor has physical prowess and a unique appearance to fulfilling with honor the alien drug dealer’s unusual role.

The director has grown as a second unit and stunt coordinator, just like John Wick‘s two excellent directors Chad Stahelski and David Leitch.

He is a man who has learned with humility, starting from the bottom and silently working and finally entertaining the worldwide public with this Vintage Alien from the 90s.

As far as I’m concerned, Dark Angel is an absolute classic of my generation, even if nowadays perhaps unknown to new Sci-Fi lovers.

A group of scientists is urgently summoned and transported to the middle of the ocean.

The area is entirely handled by the US Navy, although the situation on the surface seems apparently calm.

But the real mystery lies much more in-depth.

Indeed, the operations commander-in-charge explains they found an unknown spaceship at the bottom of that slice of ocean.

The group counts three men and one woman, an elite chosen for their merits and different scientific skills in order to establish the first contact with what could be an alien civilization.

Together with the Commander, they will settle in an underwater habitat near the crash site and then enter the spaceship to explain the mystery.

But inside of it, scientists will find a mysterious sphere that seems to be sentient and can open the most hidden doors of the human mind, giving prodigious powers to those able to open it.

Sphere is a fascinating Sci-Fi mystery where contact with aliens occurs indirectly. Through the object left by them to wander in space, human beings acquire incredible abilities, only to discover later that they can’t handle them.

A superlative cast also plays the quartet of scientists on their underwater journey.

Are we the real extraterrestrials?

Above all, Dustin Hoffman is severe but also funny in the role of the psychologist. He almost seems useless initially but will be fundamental to quell the group’s internal struggles, increasingly stressed by extreme dangerous situations.

Sharon Stone is a biologist, an emotionally and psychologically fragile woman, physically strong and extremely determined in imposing her reasons.

Samuel L. Jackson is a wise and arrogant mathematician. This man feels superior to all but is actually the first to guess the truth or solve the most challenging problems.

At his side is the exuberant scientist searching for glory played by Liev Schreiber, optimistic to the point of becoming annoying. However, the man is always tenacious in continuing his research even when others would like to abandon it.

Finally, the always-excellent actor Peter Coyote is the commander of the military. Uninterested in science and glory, the man just wants to find new weapons and technologies to add to his arsenal.

Barry Levinson probably directs his best work. Mistaken as one of many Aliens movies, it is a much deeper and more complicated story in reality.

Indeed, Michael Crichton writes a fantastic novel, clearly inspired by the masterpieces of Jules Verne. The famous writer is quoted with a fearsome sea monster, coming directly from his Twenty thousand leagues under the sea.

Sphere was a financial flop on the international market, taking in much less than its production costs. Nonetheless, it is a movie that I always recommend with great pleasure.

A pearl to all science fiction lovers full of clever thought, philosophy, and fantasy with invisible Vintage Aliens from the 90s.

The LAPD suffers a sudden crime and murder attacks spreading among the city.

Some former honest and peaceful citizens have become ferocious criminals, killing, robbing and wandering the streets without control.

The detective investigating the case joins a silent FBI agent, who seems to know more than he wants to tell about it.

When the two face another crazed citizen, they discover an alien capable of subjugating humans and is responsible for all the recent crimes, changing through different bodies.

It is a being who enters a body like a parasite and uses it to satisfy his desires and whims, killing anyone who annoys him or gets in his way.

Since then, they have become the only hope of stopping the greedy and destructive anarchy that the alien is spreading throughout the city.

The Hidden is a manhunt of the third kind with great pace and fascinating sci-fi overtones.

The alien has no intentions of conquering the earth or ideals to pursue but wants to indulge in pure pleasure by mercilessly exterminating anyone who tries to prevent it.

Michael Nouri is the leading policeman who immediately understands that there is something unusual in the countless murders occurring in the city.

He is a tenacious and stubborn man determined not to let go until he knows the truth, even if this will be far beyond his most incredible expectations.

Kyle MacLachlan arrives in town in the middle of this mess. Immediately joining the detective, however, not telling him the truth about himself right away.

Indeed, the man is another alien, a sworn enemy of the criminal who is sowing terror and panic in the city. He has an unfinished business with him, chasing for years in the various planets where he stops and causes trouble.

Jack Sholder makes the best movie of his filmography, which immediately became a cult among worldwide science fiction fans.

The story travels at an incredible step, skillfully combining thrilling shooting and chases with Sci-FI and horror moments.

It proposes characters who, initially seeming stereotyped, actually have psychological depth in their choices and motivations.

The Hidden is a small piece of the 90s’ history of cinema. Perhaps snubbed by those only chasing Oscar-winning movies, it has left behind a trail of its enthusiasts over the decades.

It is one of my favorite Sci-Fi and I watched it several times on VHS, DVD, or even on TV. So I hope you will give these Vintage Aliens from the 90s at least a chance to amaze you.

I assure you that you will not regret it.