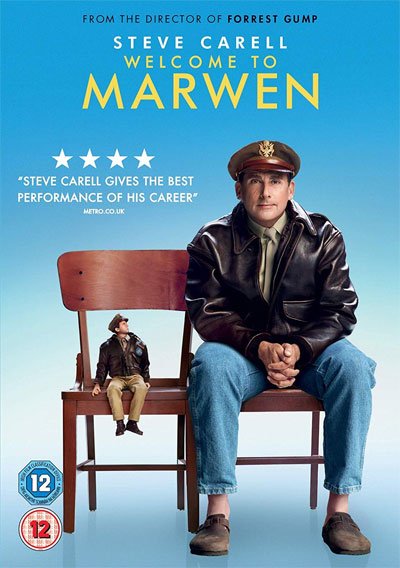 Welcome to Marwen is the story of a successful cartoonist nearly dead after a group of thugs attack him in a bar.

Making fun of him because he likes to wear women’s shoes, the men then savagely beat him almost to death.

Due to the injuries, the man can no longer write or draw. But the desire to express his imagination and creativity remains anyway.

Thanks to some friends’ help, he starts building a fantasy village, Marwen.

Populating it with dolls and models, he starts inventing fantastic stories with a handful of girls fight against the Nazis.

He participates in this fantasy as the girls’ leader, haunted by enemy soldiers trying to destroy his city. He also has another enemy in a magic fairy, blue as the painkillers he takes every day.

Not being able to draw anymore, he photographs the puppets creating amazing albums that later become worldwide successful.

At the dawn of the trial against his aggressors, he must find the courage to face them in the courtroom.

Welcome to Marwen is a beautiful animation/live fairy tale with magnificent special effects that blend perfectly with reality.

It is a happy story hiding many dark sides when the pain and fear transform the dreams into terrible nightmares.

Steve Carell gives a generous and funny interpretation of both the man’s role and his hero’s puppet.

He is sad and strong as a man to had to reinvent his life from scratch. Although a group of thugs unfairly ruin him for fun, he will then have his rebirth with his brilliant mind.

In addition, he has new love’s hope in the new neighbor played by Leslie Mann, sympathizing for him right away.

The girl is sweet and sensitive, but she is continually disturbed by her ex-husband. Because of his uncivilized behavior, he is reminiscent of the same men who attacked the protagonist.

Robert Zemeckis constructs a fabulous riot of special effects, combat and magic of a powerful and layered imaginative world.

Indeed, each puppet of his plastic world represents the hopes and fears of the protagonist.

Most of all, the fear of being alone and being overwhelmed by pain, often refuging in his fantasy puppet’s town.

Welcome to Marwen is based on the real story of Mark Hogancamp and is Marwencol art installation.

His imagination and his closest friends’ love has won against the cowardice of the Nazi bullies who beat him up.

The courageous victim, creating a shield’s fairy world from human evil, then amazed the world with his photographic art.

Unfortunately and painfully, the movie was a big commercial flop, grossing very little compared to the high production costs.

Therefore, we must revive his fame and keep talking about it because it is a story about the fantasy that overcomes the violence that each of us should see at least once in a lifetime.