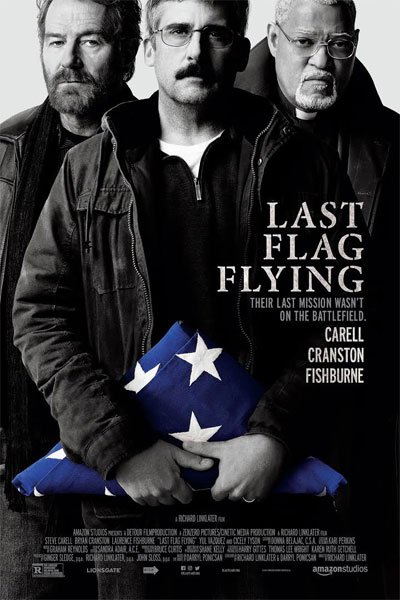 Last Flag Flying is the story of three friends reuniting years after the Vietnam War, where they got into trouble and one of them end up in prison.

He will be the one to look for the other two, asking them to accompany him to bury his son, recently killed in action in Baghdad.

When he later discovers that the army lied to him about the death circumstances, he decides to take care of the body personally.

To finally reunite the family, he decide to takes his son to the same cemetery where he buried his wife.

Escorted the victim’s best friend soldier, they also travel through memory, looking back on their army’s youth.

Last Flag Flying is a beautiful reunion of old comrades. They change profoundly in their maturity after a youth made up of excesses, alcohol and drugs.

The protagonists’ jokes and squabbles are fantastic and correctly mark the story’s rhythm. Indeed, it always creates an inexhaustible atmosphere of sweet and melancholy comedy.

Steve Carell is the one who is the trigger for the whole affair. A shy and reserved man with a modest attitude, but also witty and intelligent when he finally opens up with his friends.

Despite repeatedly suffering from bad luck, he has always managed to recover and lead a happy and peaceful life with his family.

But when his son dies, he feels lost and looks for his old friend Bryan Cranston.

The actor plays his role with hilarious aggression, as a bartender and alcoholic who lives his life without much expectation.

Together, they will then go looking for Laurence Fishburne, a friend who always had a violent disposition in the past. By the way, ironically, he has instead become a priest and pastor of his small community.

The addition of this character creates an explosive mixture and a sequence of irresistible lines.

The many dialogues are about religion, God, the army and even Saddam Hussein, announced on tv as just killed in those days.

Richard Linklater directs the movie in his proven and compelling style. He wisely alternates comedy and drama, blending them without one exceeding the other.

The result is a gentle and entertaining novel on the road. Between three men with such a mutual attitude, it is almost natural to empathize right away.

The three friends reflect with irony about their defeats and their little personal tragedies. They are immediately amiable, facing their difficulties with the common man’s serenity and simplicity.

Last Flag Flying is an almost unknown work by a quite famous director, especially for his sizzling musical comedy School of Rock with the wild Jack Black.

Unfortunately, however, this was a poorly distributed and advertised film. Despite being still recent, being released in 2017, it is now almost disappeared.

I hope with these words of mine to have sufficiently intrigued you to decide to give it a chance. It will surely be a movie that will leave you with a melancholy smile before the credits.