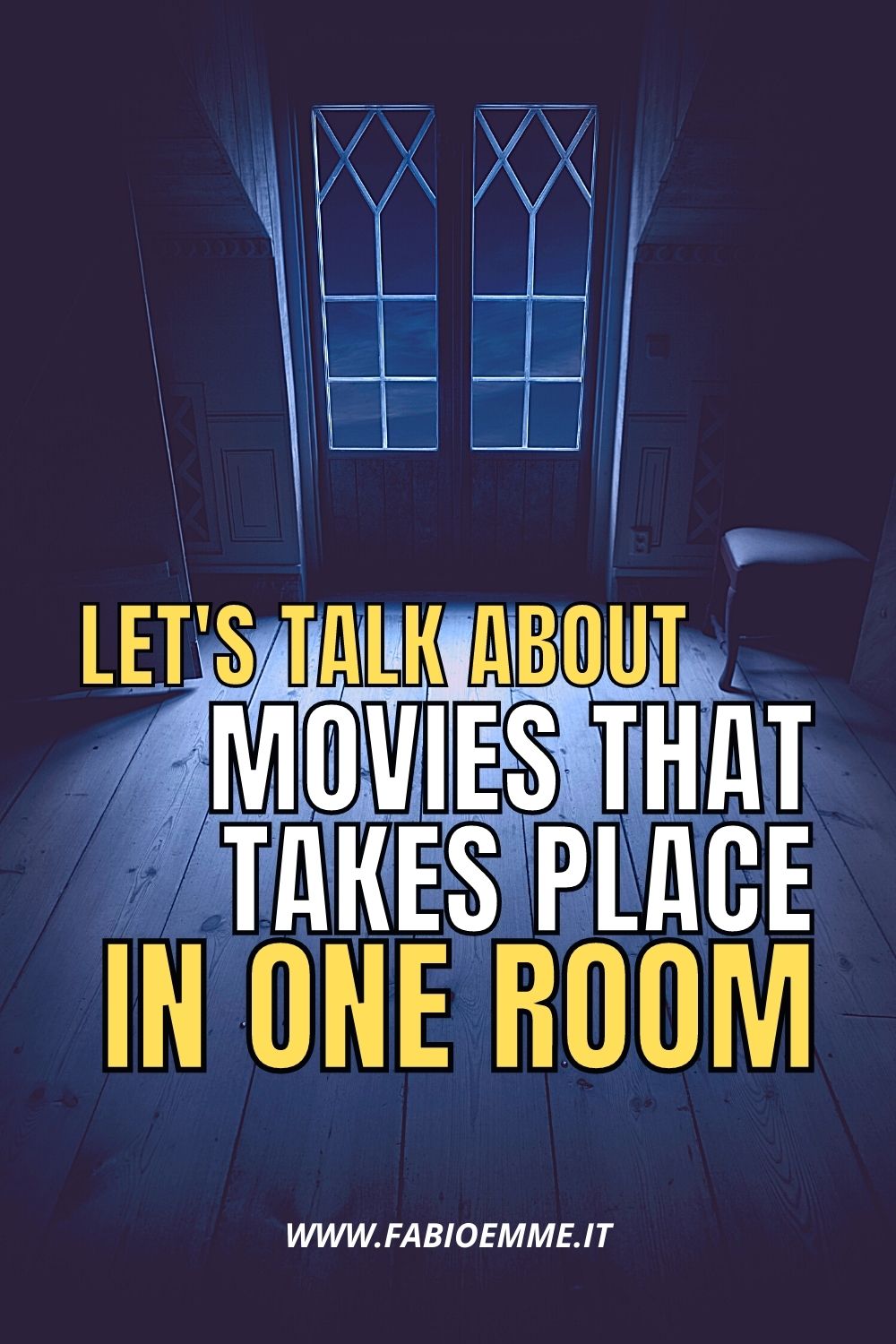 The whole world can be in one room, a person’s whole life can be a room.

3 Movies that take place in One Room that you may have missed over the years and you should definitely watch.

Cube begins with some strangers waking up in a mysterious prison without any memory of how they got there.

Unable to understand what is happening, the survivors set out in search of an exit.

When one of them brutally dies after accidentally setting off a trap, the survivors become terrified.

The prison is an endless series of cubic rooms with different colors. Strange numbers connect all these places, some of which are safe and others with hidden deadly devices.

But the threat isn’t just the building. Because of the forced coexistence, they will become more dangerous as they’re more weak and scared.

In the final analysis, their worst enemy will be themselves.

Cube is a science fiction story full of suspense and with a series of enigmatic and intriguing characters.

The plot is full of twists and brilliant ideas carried on with great talent and imagination. But the movie’s real heart is the relationship between the mysterious prison prisoners.

Indeed, these men and women radically change throughout their experience. Who seems tough and more reliable becomes dangerous or has a sudden psychological breakdown.

However, others initially seem even useless but then prove to be fundamental for the group’s survival.

The two most striking examples are the characters played by Maurice Dean Wint and Andrew Miller.

The first is a big and stubborn policeman who immediately rises to the role of leader, guiding the others room after room looking for the exit.

Instead, the other is an autistic boy, confused and disordered, who repeatedly puts the lives of others at risk for his naive impudence.

Not surprisingly, the two characters hate each other right away and then reveal themselves later for what they really are.

The two female actresses, Nicky Guadagni and Nicole de Boer, are very different from each other. One is older, anxious and emotional, while the other is younger, more rational and scientific as a math student.

Finally, David Hewlett plays the funny architect, joking about everything and seemly not afraid by the threat.

In reality, the man will be the only one who has a marginal knowledge of the building they are trying to escape.

Vincenzo Natali directs and writes this sci-fi thriller in a masterly way.

The author creates a simple and effective tension, using a single room on the set whose color and small details regularly changed.

The mystery of what hidden every door is always present, as the growing madness of the characters who believe they have no more hope, beginning to attack themselves.

Cube was a great success with the public in the later 90s, quickly becoming an absolute generational cult.

After 30 years, however, it may be little known to new cinephiles, and therefore, it is my honor and privilege to add him to these Movies that take place in One Room.

Two married couples meet in an apartment to talk about their children after having a violent argument in which one of them end injured.

Without the intention of further involving the school authorities, the group wants to resolve the incident discreetly and privately.

The small reunion seems to end several times abruptly due to the exasperated temper of the injured child’s mother and the careless attitude of the aggressor’s father.

Taking a short respite, the couples sit down again at the negotiating table. But they’re unable to decide which of the two boys is more guilty and what punishments they deserve.

After a little more time and a lot of spilled wine, however, the dialogue’s tone changes. The couples begin to quarrel even among themselves and then practically any subject, forgetting the original problem.

Carnage is a funny and ruthless verbal war between two bourgeois couples. Each of them believes themselves better than the others, each with their fixations and their little and useless hypocrisies.

One is apparently more open, with the husband carrying on his modest business and the wife having writer’s desires and ambitions.

The other is more cynical and pragmatic, with the father is a lawyer chronically glued to his cell phone and the mother is a cold and detached financial consultant.

The story is all set in an apartment and boasts an exceptional poker of actors.

Jodie Foster and John C. Reilly play the two parents, who initially seems the most open and straightforward mind and heart for the victim.

But as the stress rises, all their weaknesses, ignorance and cowardice come out in a disruptive way. It will be a revelation that irreparably cracks the feel-good facade behind which they were hiding.

The unstoppable Christoph Waltz dominate the other couple. The actor’s performance is invaluable with his scornful and mocking smile.

Always too busy with his work to pay attention to anything, he perfectly embodies the desire for success above all.

At his side is the seemingly submissive and quiet Kate Winslet. The woman seems resigned to his behavior, but in the end, she spectacularly explodes after repressed over her marriage’s years.

Roman Polański confirms that he is a brilliant and versatile director, creating an exciting black comedy about everyone’s life.

A drama that comes alive for the vicissitudes of every day in which any of us can meet again. Thus, the small neuroses and fixations of the characters become the mirror of four people eternally condemned to unhappiness.

Carnage was a good commercial success in theaters, especially considering its little budget.

It is one of that movies that take place in One Room that is absolutely inevitable and worth seeing, capable of making anyone smile and thinks with melancholy about their life.

A professor, about to change city and work, invites his friends and colleagues for the last farewell before departure.

But what appears to be a typical social occasion soon turns into an exciting science fiction story.

At one point, indeed, the man claims to have been alive for thousands of years and reveals to the group his distant origins dating back to the Paleolithic.

Unable to believe their friend has managed to escape death for over 14,000 years, his friends pester him with questions trying to unravel his story.

He accepts the challenge, beginning his story about he escape aging, disease, wars and climate change for so much time.

An incredible journey from cavemen to the Sumerians, passing through the Belle Epoque and the Americas’ discovery. 14,000 years of human history told without hesitation in front of its increasingly astonished guests.

They try unsuccessfully to put him in difficulty, divided between believing him crazy or in all this story to be just a long and very elaborate farewell joke.

The Man from Earth is a slow but fascinating story, inspired by one of Star Trek‘s darkest episodes, Requiem for Methuselah, which can see a bit from a TV towards the end.

A Movie that takes place in One Room and lives and growing in pathos and tension, entirely built of dialogues, enhancing its narrative essence as if we were reading a novel.

David Lee Smith plays the main character of the professor. A man with an ordinary face and a humble and modest attitude.

He is loved by his woman and respected by his friends and colleagues, so he will make them very angry when they believe his story is a final mockery before he leaves for good.

The rest of the cast blend very well with each other, making the environment informal and extremely credible.

Among them, the most famous is undoubtedly William Katt, the old and beloved protagonist of the cult Big Wednesday by John Milius.

Very convincing is then the nice old professor played by Ellen Crawford.

The initially lovable woman turns stubbornly sour when it comes to talking about Buddhism and Christianity soon after.

As usual, an attitude reveals the unexpected hysteria and bigotry in the religious topic that, sometimes, brings out the worst side in people.

Richard Schenkman directs a film not to be missed. It is particular and refined, without billionaire sets, costumes and expensive shining special effects.

The Man from Earth‘s strength is the excellent script and the actors’ team, capable of making the incredible credible.

This is a little known pearl that I also got to see recently and I am delighted to advise you. An extremely low budget movie that I hope, in its simplicity, you will love like me, and with wich I conclude these 3 Movies that take place in One Room.