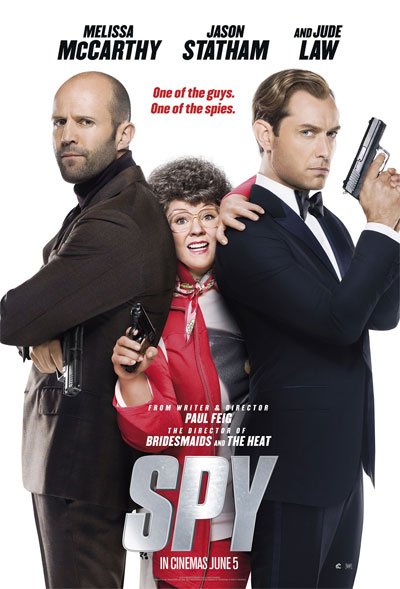 A woman has worked behind a desk for years as a personal assistant to the CIA’s best spy.

Until one day he is killed live in her monitor, and the rest of the group’s secret identities end burned. Remaining the only available agent, she must take the field and try to thwart the sale of a nuclear weapon.

Excited and frightened by her first mission, she immediately flies to Paris as an ordinary businesswoman.

When finally contacts a Russian woman trafficker, she will have to improvise as a bodyguard, following her dirty business closely.

The spy will have to decide quickly, aided by her best friend, an unlikely Italian, and a clumsy CIA colleague.

The last is a stubborn colleague following her everywhere, risking several times to ruin her mission.

But the story will not be like initially seems, and she becomes the only hope against an impending nuclear threat.

Spy is a wonderful demented comedy with James Bond’s copy in a skirt and overweight, without neglecting enjoyable action scenes and a sparkly espionage plot.

The cast forms a unique stupidity ecosystem, creating a series of intriguing and irresistible jokes and personal relationships.

Melissa McCarthy confirms that she is a comedic actress with great charisma and an explosive personality.

Her character is hilarious, accepting jokes with self-irony and responding in tune with all her lashing energy and intelligence.

Jason Statham plays here the best role of his entire career in this movie. A mean and vulgar secret agent, invincible in his seriousness devotion despite always being an inconclusive troublemaker dumb.

Rose Byrne is the story’s villain, a wealthy criminal looking for clients to sell a nuclear weapon.

Beautiful, evil, and stupid like the rest of the characters, the actress farces on her role, becoming the perfect rival for the protagonist’s lines.

Small cameo also for the always excellent Jude Law as a victim of the conspiracy, whose murder will set the rest of events in motion.

Paul Feig writes and directs this comedy back to work with the McCarthy / Byrne duo after the equally entertaining Bridesmaids.

A successful shot for the director after the uninspired Ghostbusters‘ 2016 remake, although that too has achieved great numbers at the box office.

Another pearl added to the lovely Melissa McCarthy‘s filmography, one of the more acknowledged female comedy stars.