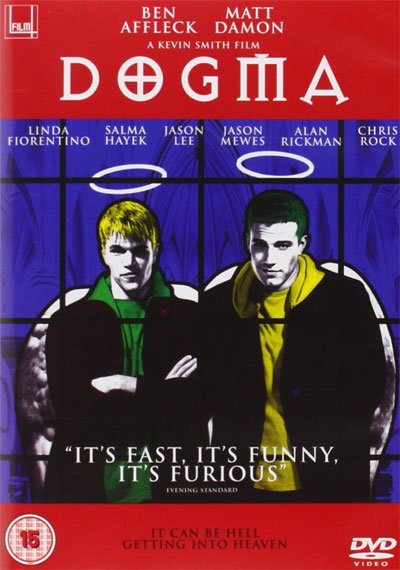 Dogma is the story of two angels who challenge the kingdom of Heaven. Wishing their freedom, they trigger a series of events that could lead to the very end of the entire existence.

Owing to God’s mysterious disappearance, Heaven sends a messenger who instructs a young woman to stop them.

She thus sets out on searching the rebellious angels flanked by two kids, stupid as few but faithful and courageous. Later, they will join together with a former apostle who falls on earth to help her.

When she discovers to be the last descendant of Jesus, the woman understands that hers is a mission predetermined by destiny.

The angels’ plan is to obtain the remission of their sins and enter Heaven again, denying God’s word and consequently undoing the foundation of existence.

A competition between the divine forces begins as to who will arrive first to a Cathedral’s crucial religious event.

Dogma is an irreverent comedy on the road about religion and human nature against the divine, full of hilarious gags and characters with great charm.

The story and its dialogues are enjoyable while pondering intelligently on Christianity and various religions in general.

Too often, indeed, they are movements that have very little spirituality, interested only in influencing the politics and economics of their geographical realities.

Ben Affleck and Matt Damon play the two soldiers of God who wage war, tired of the eternal struggle on Earth against Satan’s evil forces.

The two characters are resentful against sinners and for how they have been, in their opinion, unfairly treated by Heaven.

Linda Fiorentino is instead the unwitting instrument of divine justice. A lonely and unhappy woman who, only with her innocent (more or less) presence, will restore the balance between the darkness and the light forces.

Jason Mewes and the director Kevin Smith are the two unlikely helpers who accompany her on her journey.

Vulgar, obtuse and hilarious; they will be a couple of friends on a joyful trip, annoying and supporting the group at the same time.

Chris Rock is equally direct and unstoppable in the role of the black apostle which comes directly from Heaven.

The comic actor manages to snatch a smile even in the most unlikely situations. With his attitude and wise tips, he follows the woman in the path to becomes aware of her destiny.

Kevin Smith writes and directs one of the best comedies of the 90s. He manages to tackle serious and complex subjects without ever taking himself seriously or being banal.

A dangerous topic’s choice since the religious argument is delicate can easily arouse the most biased or extreme annoyance. But in this case, there is really nothing to complain about, and the story succeeds fully.

The characters are strong but also with their weaknesses that make them, in their way, all obtusely ridiculous.

A small independent director deserving his victory and now becomes famous. But despite money and fame, always wanting to provoke and create as he does initially.

Allied – Love In The Shadow...