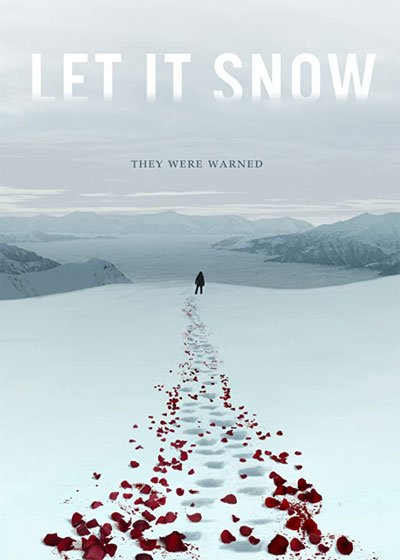 Let it snow is the story of a couple traveling away from their city for an extraordinary Christmas holiday.

Both lovers of extreme sports, young lovers want to spend a snowboarding weekend in an isolated resort in the mountains.

It was supposed to be the vacation of their life. A dream to remember forever, where he would finally declare his love and propose to her.

Right from the start, the two feel a strange atmosphere in that place. The hotel staff’s ambiguous attitude, who seems to be spying on them, makes the girl even more uncomfortable.

But the two stop thinking about it, enchanted by the panorama. A so-long waited and immaculate snow on which they can’t wait to perform their feats.

Shortly after their departure, they go away in the middle of white nowhere. But suddenly, the dream becomes a nightmare when a mysterious man aboard a snowmobile attacks them.

Trying to escape, they separated into a storm. So the girl starting a long walk around the mountains looking for her boyfriend.

It will be an ordeal amid the cold and indifferent nature’s desolation. Every minute more weak and desperate, she will have to defend herself from the motorized maniac’s continuous threat.

Let it snow is a story of love and revenge.

Indeed, the love between the two innocent young people is destroyed by revenge for a tragedy for which they are not to blame.

However, the mysterious killer is entirely indifferent to their innocence and will carry out what he considers a life’s mission without mercy.

The beautiful and sweet Ivanna Sakhno is the lost protagonist, hunted by the maniac the whole movie.

In her way, she is candid and innocent like the snow surrounding her. Tired and desperate, she will hold up on the love for her boyfriend and the hope of finding him.

Boyfriend played by Alex Hafner, an intelligent. A successful man who never seems to understand her enough, finally ending dragged away in front of her eyes.

Indeed, he probably should have listened to her from the beginning when the girl distrusts the resort’s disturbing manager.

A character who appears a few minutes but is essential to create the right tension, played by Tinatin Dalakishvili.

The actress is skilled in taking advantage of this chance with excellent and disturbing simplicity.

The tension is palpable right away, then growing in the central part on the notes of the song Let it snow, used in the moments in which the reason and background of the various crimes finally discovered.

Not everyone would like this movie. Surely, you must savor and welcome its slow and reflective rhythm to immerse in the story’s mood.

Let it Snow may not be one of those horror stories with rivers of blood or demonic beings that emerge from the depths of hell.

Nonetheless, it manages to mark its niche made up of pure evil and the fatality of a series of senseless murders.

I personally love this type of atmosphere made up of small personal stories and dramas of a few characters.

Despite its limited success with the public, I finally recommend it without hesitation for anyone looking for a thriller that works from the first to the last minute.