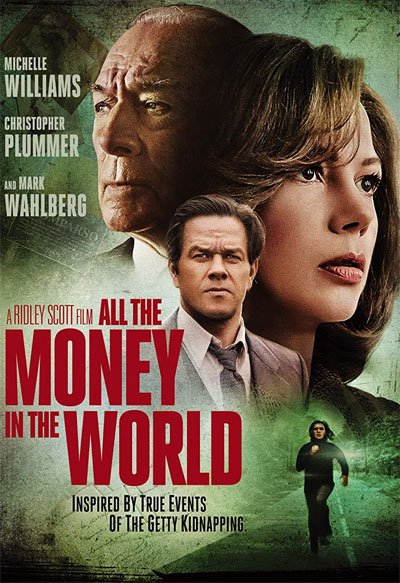 All The Money In The World is based on a true story, the kidnapping of the grandson of a well-known billionaire in Italy during the 1970s.

As soon as informed of the fact, the desperate mother flies to Rome and begins a long mediation with the kidnappers.

However, the woman does not have the money that the kidnappers require for the ransom, and she must ask her son-in-law for help.

The relationship between the two has never been easy, and over the years, the situation has worsened further after her husband’s growing drug addiction.

Surprisingly, although the ransom represents a negligible amount for the man, he absolutely refuses to pay.

While trying to buy time, in the meantime, she accumulates as much money as possible to save her son’s life.

All The Money In The World is an incredible true story, with the venial passion of an older man for his money combined with his daughter-in-law’s visceral hatred.

The wealthy grandpa’s role was originally assigned for Kevin Spacey, then overwhelmed by personal scandals and replaced by Christopher Plummer.

The actor had to re-shoot all the character scenes. Despite we will never know Mr. Spacey‘s interpretation, Plummer plays his role masterfully.

He is absolutely indifferent to the mother’s anxiety and his grandson’s sufferings in the kidnappers’ hands.

Even worse, he sees the kidnapping as an opportunity to permanently establish his power and control over the whole family.

Michelle Williams is excellent in the troubled mother’s role, enclosing all the situation’s anger and weakness in her eyes.

Due to pathetic personal disputes, she is abandoned by the wealthy son-in-law who could solve the situation immediately if he wanted.

The woman desperately tries to put together impossible money for ordinary people, committing everything she possesses without succeeding.

During the long dramatic days and money transfers, only a former CIA agent tried to help her. Mark Wahlberg plays this role strongly.

Initially hired to control the woman’s actions, he quickly takes her side, using his experience to find the kidnappers’ position.

Ridley Scott guarantees an impeccable historical reconstruction of the time and is immeasurable at combining thriller with family drama.

This story strongly divides the world into rich and poor, a horrible fairy tale where money is literally life.

The hateful older man has a heart full of misery and resentment for a mother who always rejected his wealth. But when she needs it, the man makes her suffer as long as possible, denying an insignificant sum to him.

Unfortunately, All The Money In The World was not a commercial success, earning little more than its production budget.

However, it remains one of the most beautiful, intense, and intelligent movies based on old-year true stories.

A sad opportunity to see how money can distort man’s mind, transforming the other’s misery into his personal power’s play.