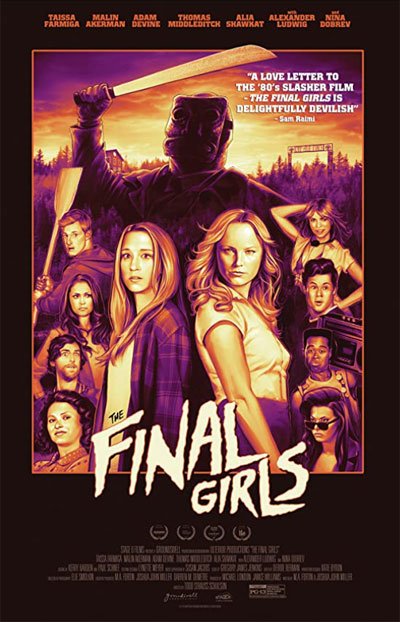 The Final Girls begins with a young girl trying to put her life back together after her mother’s tragic death.

She was a little horror movies actress, died years early in a car incident. After a troubled period, she begins to hang out with friends again, organizing an evening together at the cinema.

However, she does not know that the movie’s main actress of the night is just her deceased mother.

In addition, during the projection, the cinema magically disappears, and the small group of friends falls into the movie.

Since it is one of the horror movies where teenagers die badly, they immediately panic. Trying to figure out how to return to reality, they’ve to cooperate with the movie’s dumb and joyful characters.

But the girl has not so much hurry like the others. While they are in the movie, in fact, she has the last chance to stay with her mother again.

The Final Girls is a bizarre and almost two-sided film. Indeed, behind the various protagonists’ apparent stupidity, it is intelligent and fun in its ideas.

The characters continuously play about knowing in advance the various clichés slasher of horror movies. Interacting with the chosen victims’ protagonists, they try in vain to convince them that they are in a movie.

But soon, they understand that they are equal protagonists and potential victims too. So the same murderous rules stand for them too, and the story explodes in a demential struggle for survival.

Taissa Farmiga is a cute young protagonist perfect for this kind of movie.

Moreover, her relationship with the mother is charming, considering she’s a fictional slasher character and therefore does not know her.

Malin Akerman plays the unaware mother who will try to build a relationship with her daughter in the few hours at her disposal.

A relationship that peaks in the brilliant final fight against the serial killer with a sexy and sad striptease to lure him into a trap.

Todd Strauss-Schulson directs the merry company of friends destined for slaughter with great fun and lightness.

The director manages the slasher moments that we all expect to see by combining them with the mother/daughter story in a touching way, working to stay fun without overwhelming the story with drama.

The Final Girls is a slasher comedy not very well known and distributed in a few theaters worldwide.

Nevertheless, on the internet, it has its small niche of admirers, like the one who is writing to you here hoping to interest you enough to push you to give it a chance.