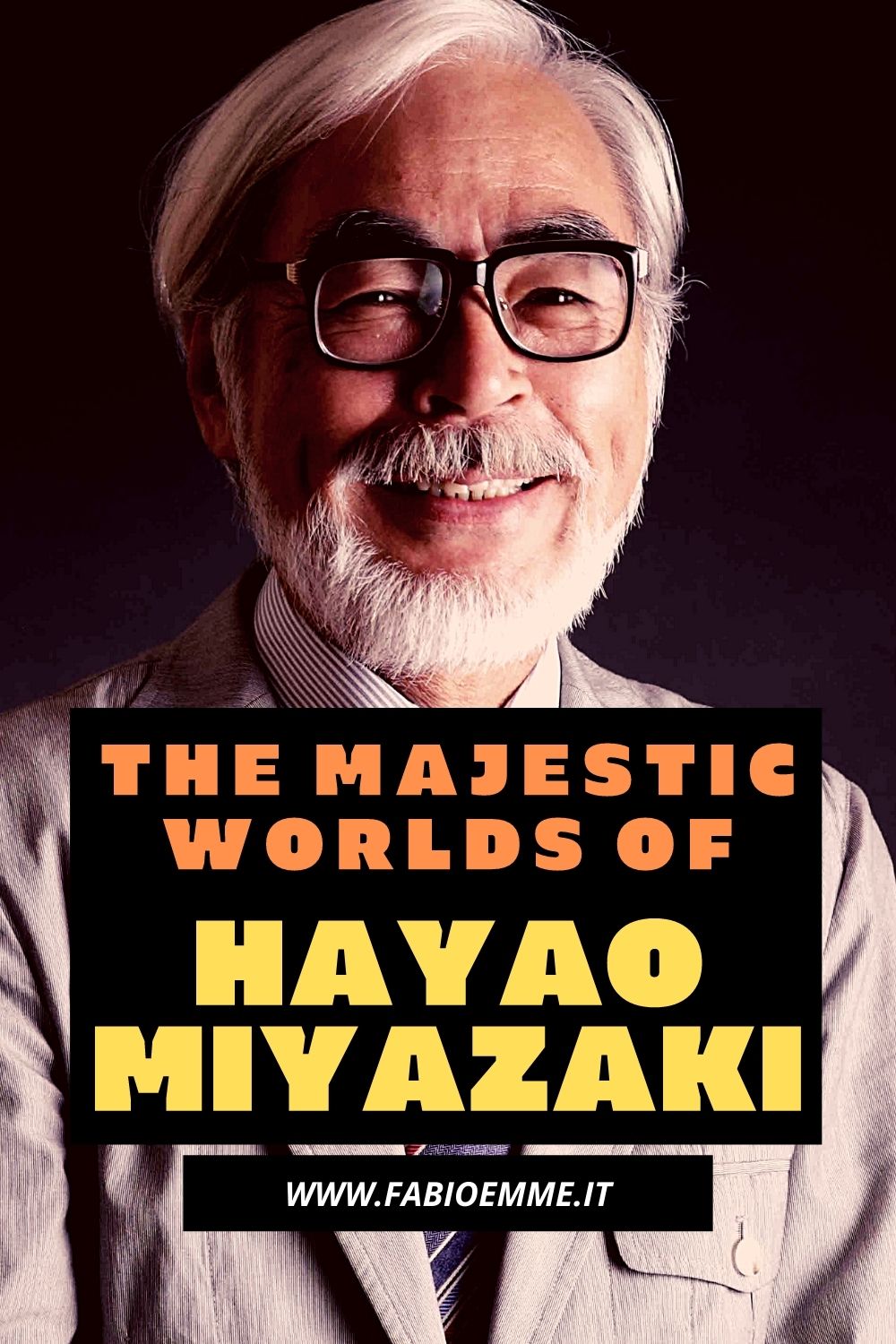 Some authors are talented and make great films. Then others also create fantastic worlds never seen before.

With the majestic worlds of Hayao Miyazaki, he falls into category as one of the best (if not the absolute best) animation creators in cinema’s history.

This brilliant Japanese director infuses his love of nature and poetry, bringing to life the seventh art’s magical immortality.

For example, let’s take four of his works to understand what we are talking about exactly.

Nausicaä is a young warrior who grew up in a destroyed world and then reborn after a nuclear catastrophe.

In this future, nature has regained possession of the world. After years, it is repopulated with fascinating and fearsome creatures ready to do anything to defend themselves.

Human beings are divided. Some try to adapt and live with the new ecosystem in respectful fear of nature’s dormant power.

Instead, others only crave wealth and power, aspiring to level forests by force and build cities again as once.

The sweet and sensitive Nausicaä will try to play her part in this conflict.

She lives helping the creatures and spirits of the forest. Also, with the same strength, the defenseless humans against animals cursed by a new and ferocious madness.

However, the war is beginning, between harmony with the green and the unconscious devastation of uncontrolled progress.

Indeed, one day a military aircraft crashes in the valley, carrying a threatening prototype of a war robot.

Finding herself amid a power feud, the protagonist and her colorful friends will be forced to choose and decide which faction to side.

Nausicaä of the Valley of the Wind is a beautiful fantasy / ecological fairy tale.

The master Miyazaki places it on his cinematographic canvas, where each frame is an inimitable brushstroke to form a more immense and superb work of art.

While trying not to show it, the protagonist is a skilled warrior suffering from her forced loneliness in being different.

The arrival of the mysterious aircraft will also bring a young soldier. A naive warrior who will open her heart, making her even more determined to defend life.

Living between human and supernatural existence, life for her is the forest, the animals, and her friends and rivals that camp in small villages on the valley’s edge.

Miyazaki‘s style is a hymn to the right to exist of every creature, plant or human being in this world.

This great little story talks about love and war, arrogance and violence, nature against technology.

The animals and plant designs move with mighty fierce beauty against the crawling rough mechanical weapons and vehicles of men.

Nausicaä of the Valley of the Wind is an inevitable film in every child’s growth, a poem that helps form a conscious thought of respect and love for one’s neighbor.

It is definitely one of the best fight and love story among the majestic worlds of Hayao Miyazaki.

A young girl leads a poor but happy life, until one day she is the victim of the curse of an elderly and evil witch.

The magic will cause her to age prematurely and run away in shame in the friendly guise of a granny.

Wandering around the city, not knowing what to do or where to go, she meets an arrogant young named Howl. As she discovers later, he’s a wizard who surprisingly offers to host her in his castle.

But the man’s castle is very different from all the others: indeed, inside, it has a magical engine that allows it to fly.

Thus begins a new life for the girl as an apprentice, helper, and cleaner for the magician. Initially, the two are happy, despite an imminent war over the kingdom.

It will be the king, through the court sorceress, to summon the powerful magician to his palace, trying to force him to take part in the conflict.

When refuses, he must hastily flee together with an old witch, now reduced to a harmless dizzy old lady.

The weird new family of friends/enemies will have to hide together to escape the powerful spells of the king’s sorceress.

Howl’s Moving Castle is a succession of brilliant ideas on magic, innocence, and the desire for youth. All themes that have always been dear to Miyazaki.

The magician and the girl only want to be free and happy and living without harming and submitting to anyone.

The magician Howl is a character who immediately wins sympathy, a braggart and swindler, apparently cynical and aloof towards everyone.

In reality, the man is much older than he seems, remaining young thanks to his magic.

The wizard hardened by wars experience, where in the past he plowed the skies, turning into a bird.

This magic over time becomes more and more difficult, leading him to refuse the king’s offer.

Miyazaki carves a fantasy world that thrives on his imagination and attention to every little detail.

From the peasants’ skimpy clothes to the royal elite’s beautiful dresses, each of his designs arouses wonder, from the wealthy landowners’ grand palaces to the dirtiest brick of the citizens’ humble houses.

A timeless fairy tale in the majestic worlds of Hayao Miyazaki that still, after almost twenty years, amazes young and old as the first day.

Porco Rosso is the name of the seaplane piloted by a legendary Italian aviator, which for a curse looks like a pig.

Once human, man has mysteriously transformed after an old large air combat, in which he was the only survivor.

The man/beast flies over Italian seas during fascism, persevering by hunting criminals for their bounty.

By tracking down pirates attacking civilian ships, he becomes so famous that they hire an American pilot to defeat him.

After miraculously escaping the first offense, the man takes refuge from a friend to repair his plane.

Here he will meet his little niece, a young but already brilliant aeronautical engineer. Searching for adventure, she will accompany him in his revenge with the American.

This movie is a joy for the eyes and the heart and an act of love to aviation’s wonders and the splendid Italian seas.

The story flies as lightly as the protagonist’s airplane, enhancing the beauty of the drawings and the characters’ poetry despite the omnipresent war in the background.

Porco Rosso is also a biting satire against fascism. It is no coincidence that the protagonist’s most famous joke is, I’d much rather be a pig than a fascist!

It is no coincidence that this joke happens in a cinema while watching a remarkable animated film by Disney.

Indeed, like the omnipresent humor of history, it is always useful to remember that the imagination always outlives the worst monsters in human history.

Miyazaki is happy to talk about another of his favorite topics, his love for the marvels of aviation mechanics.

The pig’s bright red seaplane, once severely damaged, is lovingly rebuilt by a group of lovely grannies.

Women at work in place of their children and husbands, all of whom went to war. The sweet niece is also the object of all pilots’ desire, loved and respected for her candid and innocent determination.

An absolute and inevitable cult that every cinema lover should see at least once in their entire life.

The protagonist of The Wind Rises is a man who grew up with a passion for airplanes.

When he finally reaches the position of principal engineer in constructing a prototype, Japan is now at war.

For him, it will be a project full of problems and difficulties, facing the frustration of having little money, means, and materials to work with.

He will try to ask for help from a German aviation colleague, enthusiastic about his designs. Both will fight with the exasperating slowness of their military bureaucracies.

In the same period, he falls in love with a girl he met during his long train journeys.

She’s a tender, caring, and sweet creature, unfortunately suffering from a severe and rare disease without any possibility of a cure.

The couple tries to face her conditions, moving to a quieter and cleaner natural place, away from the city bustle.

While facing the pain and the awareness of slowly and inevitably losing his love, the man manages to complete his project.

His prototype was a huge success, quickly becoming one of the most famous warplanes in Japanese aviation history.

The Wind Rises is a beautiful pacifist story full of dreams and love, despite his weapons and his military background.

The story is set in wartime yet full of color and joy, honest people with big projects that have to overcome great difficulties to make them happen.

The great Japanese author, as usual, takes the opportunity to talk about his favorite themes.

So we still have love, innocence, and youth narrated in his usual dreamy and poetic style, confirming his passion for airplanes already shown in Porco Rosso.

He narrates the characters’ growth and their change, pain, and loss without giving up on dreaming big for their projects.

Based on the life of a famous 1920s Japanese engineer, discontented with creating killing machines, though proud of his work’s genius.

Released in theaters in 2013, Hayao Miyazaki writes and directs what, to date, unfortunately, remains his latest masterpiece.

It is an unmissable film, after which we, too, can only dream that it wasn’t really the last of the majestic worlds of Hayao Miyazaki.