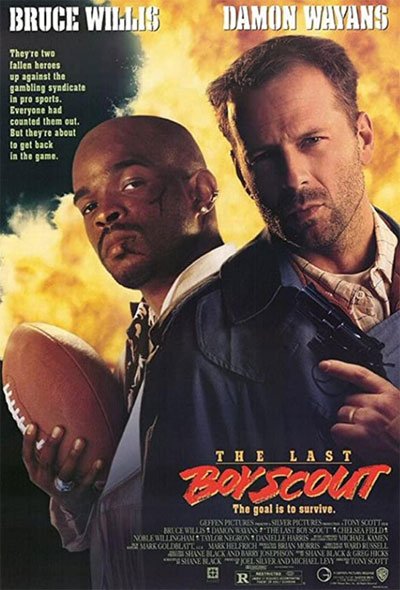 The Last Boy Scout is the story of an alcoholic detective and a ex-football player with serious addiction, joining in investigating the death of a stripper.

The victim was blackmailing a criminal and, afraid of being attacked, hired the detective as a bodyguard, without her boyfriend’s knowledge.

Then, when he’s framed for murder and his daughter is kidnapped, they realize they are alone against an entire city of criminals, police officers, and corrupt politicians.

Their only way out will be to try to foil a bombing and get justice back on their side. The unusual couple will then fight until the last punch and football-in-the-face hit to stay alive until the credits.

The Last Boy Scout is one of the best pure entertainment action films of the 90s. A story of crime and fun jokes where thriller and comedy merge perfectly.

The evil characters work hilarious, with the right challenge to the two buddies, also not exactly good and innocent. Often gambling with fire, the two put the lives of other innocents at risks, such as the detective’s wife and daughter.

Indeed, Bruce Willis plays a hopeless alcoholic, barely able to do his job. Betrayed by his wife and hated by a daughter who doesn’t understand him, his life drags on aimlessly day after day.

The man tries to resist, even if disappointed by life after a prestigious job for the government, from which a perverse and corrupt senator kicked him out.

Damon Wayans instead is a former football star whose career is over after a serious injury. A wound from which the man has never been able to recover and which has left him, in addition, with a problem of addiction to painkillers.

Despite problems, the man madly loved his girlfriend, which does not tell him all her problems. So when she ends brutally murdered, the man has nothing to live for except to find the culprits.

Finally, there is a very young and sexy Halle Berry playing the stripper girlfriend. It was a small role for an actress yet almost unknown, but her charisma and brilliant sympathy was already there.

Tony Scott, the little brother of the great Ridley, directs one of his most successful actions. Maybe not famous as Top Gun or Days of Thunder, yet it is more simple and complete as pure entertainment.

The Last Boy Scout did not generate large revenues for its producers, roughly cashing its production budget.

Despite this, it certainly remains one of the most direct and effective actions of the 90s. It does its honest job with good direction, excellent actors and with several scenes to remember.

As a small example, always remember: never bother Bruce Willis while he lights a cigarette!