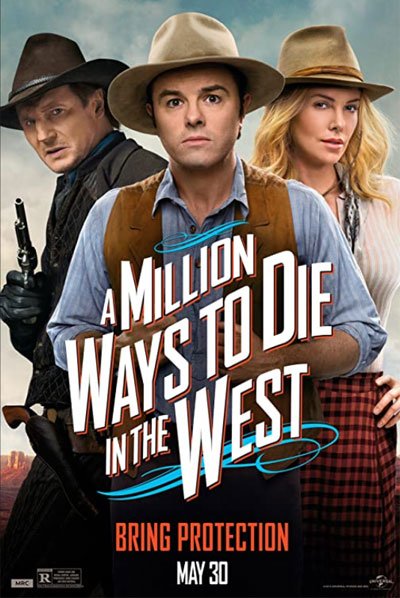 A small cattle rancher living in a quiet town, always complaining about how dangerous times are.

After a while, he bored his girlfriend, who dumps him for another man with a better mustache.

Upsetting his existence, a new gang of criminals arrives in town. With his bad luck, obviously, he falls in love with the evil boss’s woman.

At that point, the simpleton and a bit of a coward will have to face the most dangerous gunslinger in the West criminal justice way. Helped by the villain’s woman, he will have to face him in a duel in front of everyone in the city’s main street, having only one week to prepare.

However, this comedy is a hilarious and demented parody of the western genre, with credible protagonists and intelligent and fascinating dialogues.

The comic gags follow breathless, blending perfectly with the weak against the bully challenge to conquer the beautiful blonde gunslinger.

A Million Ways to Die in the West is written, directed, and starring Seth MacFarlane in the leading role.

The Family Guy series’s famous creator uses his consolidated biting and ruthless humor, sparing no mockery and malice for everyone.

Charlize Theron is always amazing in any role. Like the villain’s abused partner, finally saying enough to the bullying of her man. Then falling in love with the simple but pure boy with an innocent air and always a ready joke.

Liam Neeson is also perfect as a villain, playing the game and enjoying the atmosphere’s general dementia. He still does not lack in his cruelty, killing without hesitation anyone who is in his path.

The pretty Amanda Seyfried as stupid but lovely girlfriend and Giovanni Ribisi as best friend to complete the cast. The latter is an actor from dramatic to comic roles, such tv series like Friends or My name is Earl.

A Million Ways to Die in the West is a comedy to watch any night and with any company, perfect in its simplicity and direct and irreverent jokes.