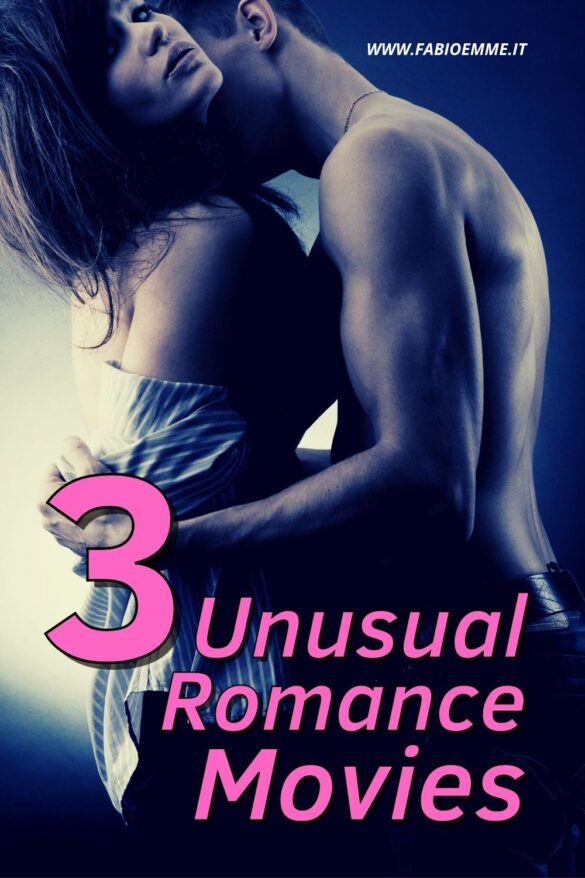 Love is not always how we want or seek it. Sometimes it falls on us, and it’s up to us to decide whether to grab it or let it slip away.

3 Unusual Romance Movies not to be missed for those looking for something different and always have the courage to dare.

La belle époque tells the story of a mature couple breaking up after years of slow decline marriage and misunderstanding.

The man was a once successful draftsman but now doesn’t keep up with time since his reluctance to use new digital tools.

She was a free and uninhibited girl, now serious and austere, no longer tolerate her husband’s. Besides the financial straits and sarcastic temper, he’s always ready to argue with anyone for any reason.

Suffering from separation, the man decides to participate in an expensive staging. Indeed, with professional directors and actors, he wants to relive the best moments of his life on a movie set.

Initially skeptical, then he recognizes the outstanding quality of the fictitious replica. It is so real he even falling in love with the actress playing the young version of his wife.

But the actress already has a complicated relationship with the equally unbearable director, complicating their work and personal lives.

La belle époque is basically two romance movies, one inside the other. A world where past and present merge simultaneously. So, finally, the cynical man becomes young and romantic once more, realizing what he has lost.

In addition, the love story between the director and his actress is equally beautiful. The man adores but sometimes mistreats and humiliates his beloved muse. As revenge, she will awaken his jealousy by flirting a little too far beyond her acting duty on set.

Two stories have different love languages and times​. Which, as with all metacinematographic requires, in addition to an excellent screenplay, also actors who are up to the task.

The first couple is the more mature one. Two great actors like the biting Daniel Auteuil, driving crazy the beautiful Fanny Ardant until they break up their marriage.

The couple, reviewing their past staged like a movie, remember their passion and the many things lost over the years. A lot of time while raising their children, working their careers, and always having less time available as a couple.

On the other hand, the two youngest lovers are Guillaume Canet and Doria Tillier, carefree by family commitments.

However, both are more superficial and less willing to commit, not wanting to block their lives in the long term, still having a long future ahead.

But both will understand that a simple casual relationship of sex and arguments is not enough for anyone. Therefore, one of the two will have to take the first step, one way or the other.

Nicolas Bedos writes and directs this game of mirrors in which the protagonists voluntarily deceived to relive the happiness they have lost.

The movie is also exciting from a practical point of view. Indeed, it shows how to make a movie set and manage an intricate, different, and contrasting crew.

La belle époque is a movie that is little known and distributed internationally. I am therefore happy to recommend among these 3 Unusual Romance Movies, bringing to many may have never heard it.

A romantic and dreamy story, made up of simple moments in which each of us can identify, thinking back to our past with the sad sweetness of time that passes.

A woman has been living for years with a man obsessed with an old retired rock star legend.

One day, he receives an unreleased piece called Juliet Naked, instantly loving this song. The woman, disagreeing, writes angrily on the partner’s forum and the same disappeared rock star responds.

Agreeing on the insufficiency of her man’s opinions, the two become friends beginning to write regularly. Therefore, when the opportunity arises, they decide to meet in London.

Looking close at his relationship with his family, the woman discovers a very different man from his fans’ mythical legend.

Delicate romance comedy about music and the myth of the stars against their real and fallacious humanity.

Rose Byrne pretty and gentle in the role of the protagonist. A woman insecure and apparently succubus to her man’s mad music fixation.

When she finally stops indulging him, the woman begins to discover herself and starting a new happier life.

Ethan Hawke is equally solid and friendly in the fallen rockstar’s role, a man with a complicated past. On many occasions, selfish and stupid, indeed also protective of his youngest son, always lived with him.

Free from his role as a myth healed by the crowds of years before. For this reason, Precisely more peaceful than during the days of his legend, which led him to countless wrong decisions.

Chris O’Dowd hilarious in the adult’s role who admires the old singer as a stubborn kid who never listens to his woman. Even when he meets him, finding more skill and talent than he actually recognizes in himself.

Juliet Naked is an attractive carousel of brilliantly and melancholic situations, indeed, perfect to be one of these 3 Unusual Romance Movies.

Professor Marston and the Wonder Women is the story of the genesis of a legendary character and a love triangle openly opposed by the bigoted, sexist and racist society of the 40s.

A married couple conducts his research on various aspects of the human psyche and personality, also trying to create the first polygraph/truth detector prototype.

A young student joins them, enthusiastic about their projects, and gets involved in their sex and love life over time.

Kicked out of school once someone exposes their triangle relationship, the three have the idea of ​​creating a comic to earn some money and continue their research.

Thus was born the iconic character of Wonder Woman, an amazon warrior with her personal Lasso of Truth/lie detector and openly with bisexual and sadomasochistic sexuality.

Professor Marston and the Wonder Women is a splendid and unusual love story, but not only. Many comics movie fans will indeed find it intriguing to know the origins of one of the most famous heroines in the world of cinema.

Unfortunately, a character who modified for commercial reasons has lost much of its original characteristics, altogether canceling her sexuality and the explicit essential feminism in her adventures.

Luke Evans plays the male apex of this love triangle. A brilliant and nonconformist man who will pay dearly for his unusual sexual relationship with the two women.

Furthermore, he also has a fetish with sadomasochistic aesthetics and culture, as seen from his comic’s first volumes’ appearance and contents.

Rebecca Hall plays his wife, a sexy and intelligent woman who unhesitatingly supports her husband’s ideas, defending him even when and only against everyone.

The woman isn’t afraid to experience something exciting, adding the young and seemingly innocent Bella Heathcote to their relationship.

The actress is perfect in the student’s role, who will get the couple in trouble and will be their muse for scientific research and subsequently for their Wonder Woman’s enormous success.

The movie was written and directed by Angela Robinson, who combines the romance part very well with the genesis of one of the most famous comics ever.

Professor Marston and the Wonder Women was released in a few cinemas, therefore with little box office revenues. Nevertheless, I strongly recommend it as the last of these 3 Unusual Romance Movies.

The movie is, in fact, intelligent in its narrative showing all the limits of modern myths such as cinematic superheroes. Often, sadly, stories emptied of their original true meanings for the mere sensationalism of eccentric but frequently banal costumed characters.

Hello everyone,
I don’t know the reason why some people are finding it difficult to believe that there is a cure for hiv. My name is Andre Douglas, i have been hiv+ since past three years with my girlfriend, but today i am happy that i am HIV negative with the help of the herbal medicine of Dr O.water, the great healer. I was browsing the internet searching for help when i came across a testimony shared by someone on how Dr O.water cured him of hiv. I have always believed that there is solution to all problem. I am in Bedum, Netherlands but I tried my best to make sure i spoke to Dr O.water because i was so much in need of getting his treatment. Fortunately for me, i got the medicine and used it as instructed. Dr O.water brought a smile to my face with his herbal medicine. I am so much happy today that we have someone like this great healer out there. So my people, kindly contact this healer on his email: DRWATERHIVCURECENTRE@GMAIL.COM or whatsapp: +2349050205019. please sir keep your good work because there are people out there who is in need of your healing medicine. He can also cure Herpes, Hepatitis B,Hepatitis C, HPV, Diabetes, Cancer, Asthma and more

The Treasure Of The Sierra Madre...