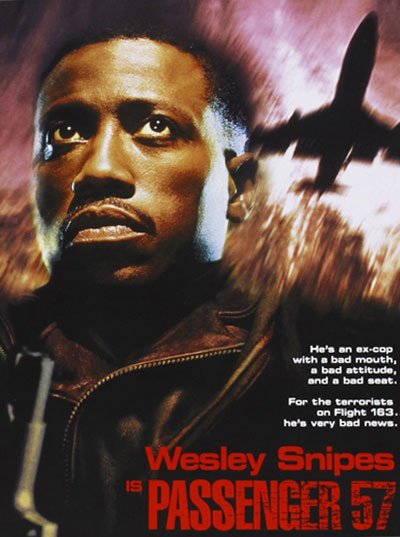 Passenger 57 is the story of the hijacking of a plane carrying a dangerous terrorist. Indeed, his accomplices, hidden anonymously among the passengers, draw their weapons during the flight and take everyone hostage.

But the ruthless handful of terrorists did not calculate the presence aboard a former FBI agent, now working as an aviation security consultant.

The man manages to fight back and then abandon the plane, warning the authorities of the crime in progress. But their psycho leader has no intention of getting caught.

While they open negotiations for releasing the hostages, the former agent will have to act secretly against his superiors’ will to avoid a massacre.

Passenger 57 is a classic 90’s action-packed with adrenaline, fighting, chases, and over the top dialogue for characters who are stereotyped in a fun way.

The long-distance duel and then face-to-face between the blonde psycho villain and the black hero works well, keeping the attention alive in a game of constant counter-moves between the two protagonists.

Wesley Snipes is an exceptional action protagonist, charming and fun with his usual bold and fearless style. Engaging in a series of fights, the actor demonstrates all his skill in choreographing spectacular martial arts scenes.

He plays an FBI agent who quit after his wife’s tragic death, looking for a quieter job as an aviation security consultant. But fate has nothing quiet in mind for him.

As the only help from the outside, he will have his dear friend played by Tom Sizemore. Also, a man with a ready-made joke will have to manage the rivalries with local police officers.

Officers immediately dislike his colleague, even mistaking him for one of the terrorists and hinder in doing his work.

Finally, Bruce Payne is the evil villain with a cold gaze and amused cruelty. Indeed, it is a kind of role that does not leave much space for the character’s psychological deepening. But that the English actor equally do is honest work, playing it in a diabolically entertaining way.

Kevin Hooks as director, manages to keep the various ingredients of the blend together with the right measure. The action scenes are amusing, frantically taking the most of the athletic prowess from its protagonists.

Passenger 57 has a huge success with the worldwide’s public. As one of them, I can confirm we all enjoyed this all-black version of Die Hard set in an airplane.

In summary, it is a classic movie to watch with friends. A no-demanding story of great entertainment to enjoy the reckless adventures of a hero fighting against everything and everyone.