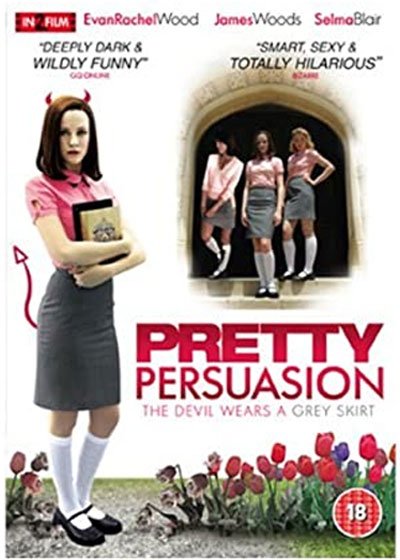 Suddenly these three friends denounce one of their professors for harassment, sparking national attention on the institute, which soon becomes the epicenter of a sex education media storm.

The characters then engage in a ruthless war between journalists willing to do anything for a scoop and relentless lawyers ready for any infamy to win their clients’ case.

Life becomes more difficult for female students without a moment of private peace while the professor tries to protest his innocence.

He is greeted with anger and skepticism by his friends, colleagues, and even his girlfriend. But everything changes when the suspicion begins to circulate that girls are lying.

In an increasingly exasperated climate of lies and manipulation, the truth will finally be revealed inside the courtroom, turning the comic farce into tragedy.

Pretty Persuasion is one of the best American comedies of the 2000s. A cynical and hilarious mediatic massacre for its characters’ raw and ruthless realism, each interested in protecting their own little personal space.

The story is an ecosystem of characters with friendly faces, hiding under a smile their little loves and betrayals, blackmail and threats, racism and fake respectability.

Ready to annihilate anyone who stands in her way, she massacres, socially, professors, boys, journalists, and even her best friend.

James Woods is exhilarating in the role of his father, a cynical and indifferent businessman. He cares only about his job and drugs, utterly uninterested in his daughter, except when she becomes a nationwide problem.

Ron Livingston is already as fun as the professor, merely unable to understand why his world is collapsing on him. First supported and then abandoned by everyone, discovering the truth in the ending will not help him at all.

Marcos Siega does an excellent job directing what could be intrusive and risky topics as racism and sex education. It succeeds in treating them with intelligence and dialogues that are always brilliant and never banal.

The movie alternates the classic high school comedy with sexier and more mature moments. Until, in the last half of the story, offering some pure drama in a series of emotional scenes.

Despite the box office results, it is a brilliant and malignant comedy.

A modern tale with no salvation for anyone, bringing out the school’s worst habits in the best cinematic way. Likewise, reflecting on the modern world through the eyes, not so innocent, of some young and beautiful girls.