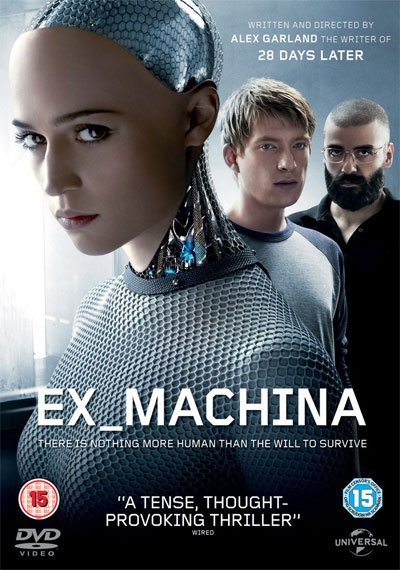 Ex Machina is the story of a brilliant inventor, inviting a young talented programmer to his luxurious and secluded home.

Enthusiastic about the opportunity to work with him, the boy accepts but is subjected to strict security measures. Once he arrives, he discovers that his job will be to test an AI for a new realistic type of android.

Starting with standard procedures as with any advanced simulation program, he begins to develop a complicity relationship with the artificial girl.

Until she demands her freedom and wants to organize an escape from her prison before her creator destroys her.

But the house is full of control measures, cameras, and accesses selected by its creator, who constantly monitors their every interaction and movement.

Taking advantage of some power blackouts that allow the android to speak freely, the boy discovers the darker and sadistic side of his employer.

Ex Machina is an outstanding three-way game. A lethal match between two characters, unshakable in their positions, and a third shifting the power’s balance.

The rhythm of these dialogues/fight between the various characters is a pure thriller, becoming an extreme struggle for survival where the differences between artificial beings and men in flesh disappear.

The actors Domhnall Gleeson and Oscar Isaac face off against each other in an exciting way. Although, the superior cunning of the oldest and richest inventor is clear. Still, the young programmer will be able to fight back until the end, managing to surprise him many times.

Alicia Vikander is the real revelation of this movie, which will launch his career internationally.

Beautiful and emotional like a real girl, the android will not hesitate to act ruthlessly when it becomes clear that the creator has decided to end her.

The talented Alex Garland wrote and directed this highest level Sci-Fi. Also, he was the author of the fabulous Annihilation, one of the most imaginative Netflix movies.

His science fiction recalls the origins of the genre with Isaac Asimov and Philip K. Dick’s fantasy. Stories looking beyond their times about futuristic robotic process automation, dreaming the impossible.

A success that fills me deeply with joy. Every time I see a movie made with love and inventiveness and capable of proposing something truly original. Original despite dealing with themes, situations, and characters have already seen, but making everything fresh and new again.