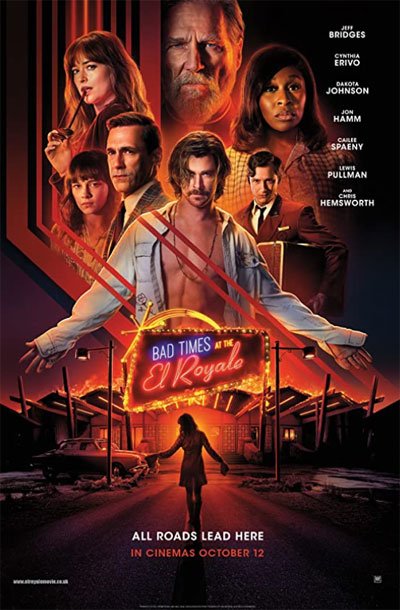 Bad Times at the El Royale takes place inside an elegant hotel on the border between California and Nevada.

A series of characters arrive one after another, taking a room to carry out their mysterious affairs.

The evening guests are very different and strange. An affable and ambiguous priest, a sad black singer woman, a woman on the run with a little girl, and an FBI agent investigating a plot.

A neurotic and elusive boy joyfully greets all of them. Although apparently harmless, he too has his past, and his work secretly goes far beyond regular receptionist duties.

Destiny wanted their paths to cross as each one finds himself in a critical moment in his life. For all of them will be a crucial night when their stories will end, in one way or another.

Finally, a sect of assassins led by a fascinating and psychopathic leader closes the guests’ gates.

Bad Times at the El Royale is a complex mystery thriller in its many characters, but direct and straightforward to follow. An intricate puzzle revealing its pieces one at a time and presents each character’s drama that perfectly fits each other.

None of them are saints, just as they are not cruel criminals. Due to bad choices or bad luck, they are simply people into a situation with no way out. A story where ambiguous individuals follow their own rules until the final and unfair criminal justice.

A movie of this kind needs a cast of actors chosen with skill and who blend, enhancing each other’s talent.

Jeff Bridges proves his versatile actor skills again as a fake priest with severe memory problems. The man will be one of the most empathic characters in all of history.

At his side Cynthia Erivo, a singer with whom he will befriend after a rough start. The woman seems submissive and unable to react to adversity, later demonstrating all her strength in the most challenging moments.

Dakota Johnson then arrives as a beautiful and mysterious woman of few words. Indeed, neither so kind words, with which he puts hotel men in line when they ask too many questions.

The young Cailee Spaeny is the troubled and confused girl with her. But his pretty innocent face hides, actually, much more cruelty and ferocity than the other adult characters.

Finally, the handsome dark Chris Hemsworth arrived late compared to the others but immediately won the scene’s honor.

Drew Goddard writes and directs this majestic mystery drama of characters giving the necessary space to know each of them.

The story succeeds in always being tense, even in the constant changes of characters, carrying on a growing thriller full of deep contrasting emotions.

Bad Times at the El Royale didn’t have much success in theaters, earning approximately its production budget. Despite the public reception, it is still one of the most exciting and engaging movies released in recent years, and the real crime is not to watch it even once.