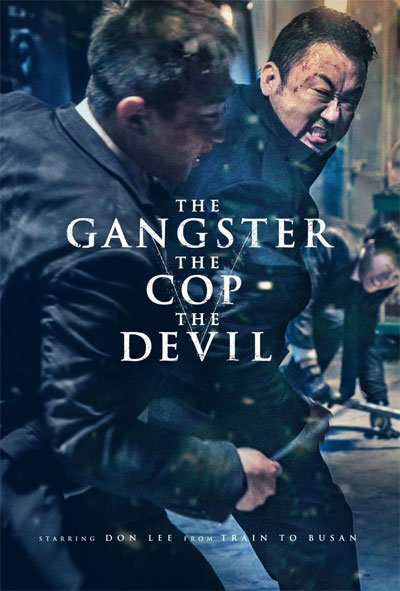 The Gangster, The Cop, The Devil is the story of a serial killer who kills undisturbed in Seoul’s streets.

After bumping into them with his car, he always kills the unsuspecting victims when they go out to check the damage.

Only one policeman suspects these murders, sadly ignored by his superiors despite his numerous protests.

But even the serial killer makes a mistake when he tries to kill a powerful local underworld boss who survives his attack.

As the sole survivor of the series of murders, the criminal becomes the main eyewitness for the cop. But the boss wants his ​​justice and unleashes his men around the city in search of the serial killer.

While hating each other, the boss and the policeman will make common cause by joining their forces to avert the city’s terrible murderous threat.

The Gangster, The Cop, The Devil is a great action/thriller entertainment show, a story where cops and criminals blend for a greater good.

The action scenes are thrilling and with hilarious comic moments, especially in the exaggerated relationship between the boss and the cop.

Two men finally discover that they are not so different. Each has his enemies and profiteers to fight, both violating and protecting the law in their way.

Ma Dong-seok is big and rough in the role of the leader of the criminals. An angry bear who, however, is also shrewd and intelligent in exploiting the police’s help even for his traffic interests.

Kim Mu-yeol is instead the young and aggressive policeman, shunned by his colleagues for his theories. But, then, also recognized as the only one who understood the threat before the others.

The two continually insult and mock each other, over time learning to know and respect their worth, while still remaining declared enemies on both sides of the law.

Finally, Kim Sung-kyu is the ruthless killer who has a good boy’s familiar face next door. The boy does not plan his crimes cunningly, following his instincts by choosing the victims randomly, quickly, and wisely.

Won-Tae Lee perfectly writes and directs this excellent Korean movie. His story intrigues and captivates mixing cops and robbers into one large group against a psychopathic evil.

The Gangster, The Cop, The Devil make good results in Korea’s cinemas. Unfortunately, it was ignored by the large world distribution, as often happens for many excellent oriental movies.

Personally, I wholeheartedly recommend it to anyone looking for great action entertainment. You will find a movie with great attention to small details and an intelligent story with a spectacularly growing pace.

Trespass – A Simple Massacre To...