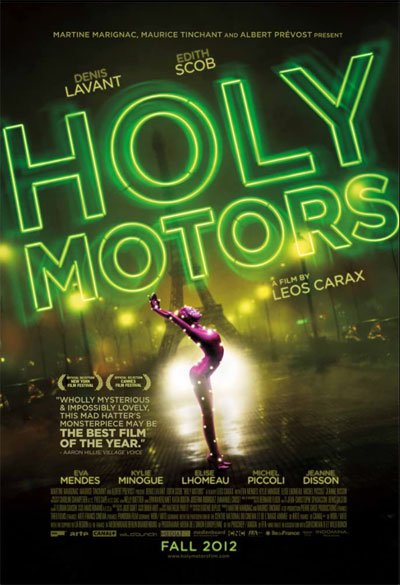 Holy Motors closely follows an ordinary day of the mysterious Monsieur Oscar. He does unspecified work, traveling all day in a limo with his trusty female driver.

Moving between his various appointments, the man puts on make-up inside the car and becomes an entirely different person.

Over the long day, his experiences become extremely varied and extravagant, in some cases bending the limits of the physical possibilities of reality. His driver accompanies him, patiently awaiting his return, encouraging him to rest and eat when tired and depressed.

Their journey snakes through 9 steps through the city of Paris, after which the two split up, and the woman returns to the limousine depot, a garage outside the city called Holy Motors.

A definitely unique movie in essence continually disputing about its real nature and mixes drama, romance, and surrealism, pushing the possible and credible limits.

A story that leaves the narrative aside to focus on acting, astounding with its protagonist’s chameleonic versatility. An act of vengeance on normal movie’s content besides the pure joy to act.

Denis Lavant, indeed, is an extraordinary leading actor. An endless mutating character passes through many roles within the same film. Transforming naturally from a beggar older woman to a half-blind monster who kidnaps a model.

A character is the living embodiment of acting art, forgetting and giving himself body and soul to his incredible performances.

Edith Scob is his trusted help who follows him everywhere all day. Driving taciturn through the Parisian streets while providing the protagonist with the files of his various appointments.

Leos Carax writes and directs one of his best works, an act of love for pure cinema. Beyond the genres, the screenplay and the characters about what tell us absolutely nothing besides their names.

A void that is full of meanings to look for elsewhere. Together with every gaze of the protagonist, there is a story and a mutating meaning. He reborn like a cinematographic phoenix in every metamorphosis, resurrecting in a new role and a new life.

Holy Motors is undoubtedly one of the most twisted and fascinating movies of recent years, despite its weak worldwide revenues, it was widely appreciated by all the international critics.

An opportunity to watch a more demanding movie, never fully explained and leaves a wide interpretation of its scenes to the viewer’s imagination and intelligence.