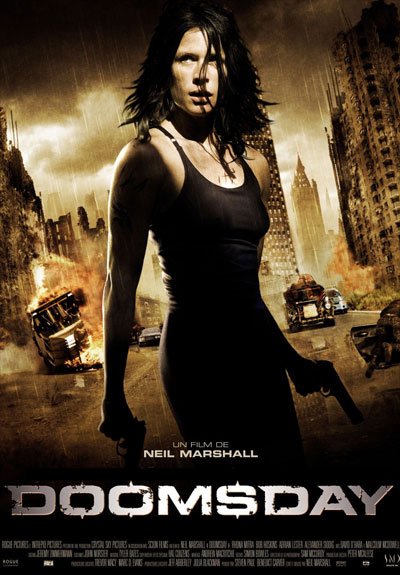 Doomsday begins with a high infection rate virus sweeping Scotland, threatening to spread across Britain. In order to contain the epidemic, the entire region is closed and quarantined indefinitely.

Ordered to remain hopeless in their homes, the population reacts violently. Then the fleeing army mercilessly exterminates the rioters, before closing the border wall for good.

Years later, however, the infections start again. The political authorities decide to isolate all of London, where the disease is now killing thousands.

To finally find a cure, a small group of soldiers is sent to old Scotland. The land, abandoned for years, seems to be populated again by people immune to the virus.

During this silence period, the situation on the other side of the wall has degenerated into a family feud.

An army of cannibal punks, led by a bloodthirsty madman, fight relentlessly the rest of the population. Population living perched in castles, back to an almost medieval situation.

Led by a woman who had survived the quarantine in her youth, the group sets out. Their mission is to find an old scientist, disappeared years ago, and now their last hope for a cure.

Doomsday is a wild action movie and a fascinating story. Casting a group of exaggerated characters over the top, yet, in their way, believable and real.

Between the many pandemic movies, it stands out for the diversity of scenarios it offers, perfectly blended together. Starting from an almost documentary look at the army acts on citizens during the riots.

Then, from today’s London, moving to a post-apocalyptic Mad Max’s style and, finally, the old medieval swords and knights movies.

As the protagonist, Rhona Mitra emerges for her beauty, physical prowess, and determination in the most action scenes.

She is a soldier who no longer has ties to the world, sent on an impossible mission by a government that, even finding the cure, would exploit it to gain the maximum political advantage, ignoring the infection rate of suffering people.

On her side, the wise old Bob Hoskins in the role of a former cop who tries to help others juggles his superiors’ daily infamies.

Malcolm McDowell, finally, always has the right face to play the villain on duty.

In this case, a man who has every reason to hate the army acts and, despite being a man of science, favors the people’s return to the most ruthless medieval times of horses and castles.

Neil Marshall writes and directs, with great skill, this delightful mix of genres. His ability always focus on the characters and the story, overwhelming it with a cascade of action scenes without being stupid or banal.

The film was not a great success in theaters, grossing more or less its production costs overall. However, it remains an essential piece of Marshall’s filmography and one of the most intelligent, original and distinct action movies of the 2000s.

Doomsday is, therefore, a movie to watch for all those searching for something new. Perhaps with characters and a story already seen, still succeeding to be fresh and innovative thanks to its director’s ideas.