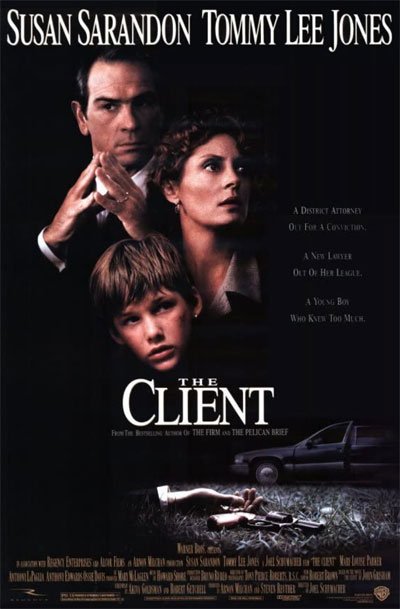 Written by John Grisham, The Client is the story of a poor boy and a hard career/life female lawyer.

The young and his little brother witnessed the suicide of a criminal. Before dying, he reveals where he buried the corpse of a critical murder.

Pursued by his gang and the FBI, the boy finds shelter in the woman’s office. She’s initially reluctant, but understanding his dangerous situation finally accepts to be his lawyer.

But in order to make a deal that protects his family, they will first need to verify that the suicide’s information is right and find the dead body.

The Client is one of the simplest and entertaining legal movies ever. Centered on two characters on the fringes, it succeeds to narrates a complicated legal plot without ever going to court.

Indeed, the story happens almost entirely outside the courtroom, in the corridors and offices where lawyers trade blows without rules to achieve their goals.

In this sense, the dialogues between Susan Sarandon and Tommy Lee Jones, the two most famous in the posters here as two older legal eagles, are simply fantastic.

The actress is funny and astute, not fooled by the man’s maneuvers, taking the little boy’s defense and almost becoming his putative mother.

She managed to survive a disastrous marriage and divorce and overcome alcoholism. Then, becoming a lawyer and a self-sufficient pride woman, but bearing the scars of her experiences.

Brad Renfro is an irritable and stubborn client, driving everyone crazy with fun. Still, he’s lovely protecting his brother in the hospital with catatonic trauma after the shock.

A character with excellent empathy for his simplicity. Played by what seemed to be a young new talented actor, unfortunately, died just in his twenty’s from an overdose.

Finally, Tommy Lee Jones is always exceptional and charismatic as a lawyer quoting the bible during his trials. Even if the presumptuous and domineering man is on the side of justice, it will make life very difficult for the protagonists.

Joel Schumacher directs this story focusing more on the characters’ personal stories than on the legal part. A booming choice for the contrasts between the various bitchy personalities, making it fun and great entertainment.

Released in theaters in the 90s, The Client was an international success earning nearly $ 100 million in profits.

Today, perhaps it is a bit forgotten, given the many legal movies coming out every year. Still, I passionately recommend it to all who love this movie’s genre.