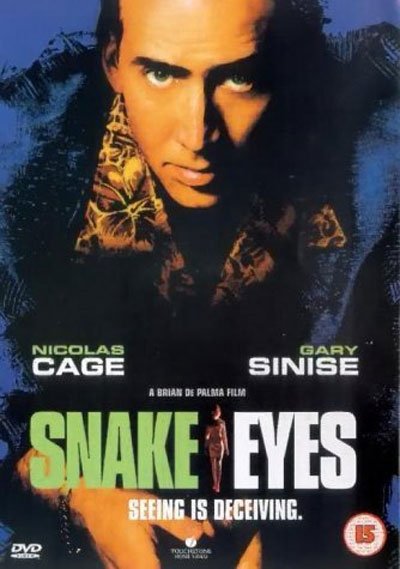 Snake Eyes is the story of a joyful evening in Atlantic City that suddenly turns into tragedy.

During an important boxing match, a detective and his friend, an army officer, find themselves in the middle of a terrorist attack.

By joining forces, they manage to kill the sniper but, unfortunately, not before he manages to kill the Minister of Defense, who is also sitting in the audience.

Convinced that is not the act of a lonely madman, they isolate the hotel/casino searching for all the conspiracy members.

But investigate will be hard work with thousands of curious people and journalists wandering the crime scene, forcing them to split up in the crowd.

Once separated, they will take very different paths that will lead them into a thrilling death fight against each other.

Snake Eyes is one of the most terrific thriller movies with extraordinary cinematic wisdom. This movie is an incredible cinema lesson full of camera virtuosity and suspension spits scenes working like a clock.

The story disassembles and then pull together the singular flashback of different characters, each of which brings its piece of truth to compose the puzzle’s solution in the finale.

Nicolas Cage is the leading and absolute protagonist of the story in the most challenging moment of his life.

A euphoric and corrupt policeman who for one night wants to do his duty to the full. But his honesty can cost of risking everything, fighting against interests greater than himself. A cynical man with a flash of pride and dignity, refusing to look away as he did for all life.

At his side, the best friend played by Gary Sinise. A rigid military that is loyal to regulations acting as the conscience and unspoken virtue of the other.

Despite looking like an apparently sinless man, he hides terrible and unspeakable thrilling secrets and is willing to do anything to keep them in the dark.

Between the two friends stands the gorgeous and naive Carla Gugino, a key witness to the crime and perhaps herself a participant in the politician’s death.

Brian De Palma writes and directs this magnificent high-tension crime with colossal inspiration and suspension. Taking the best of his technique in every scene, like the stunning first 10 minutes entirely without interruptions.

Snake Eyes was not very successful at the time, collecting the amount it cost to produce it. The results were disappointing after the success of the previous Carlito’s Way and Mission: Impossible.

By the way, it remains one of the best 90’s thriller movies of great entertainment and intelligence. With his unique and inimitable talent, Mr. De Palma repeatedly dismantling the story, becoming more and more fascinating every time.