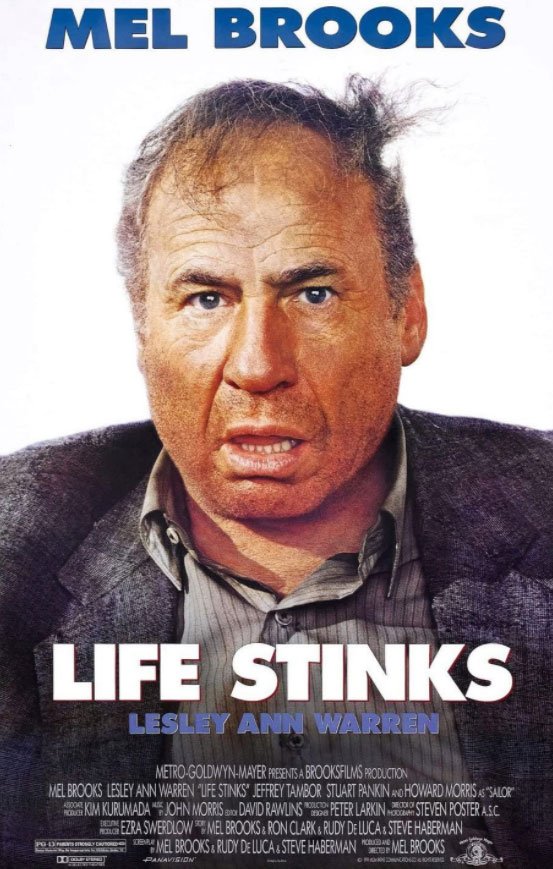 Life Stinks is the story of a wealthy and bored businessman. Having reached the zenith of success and power, he no longer finds challenges worthy of his interest.

Until his best friends dare him to spend a month surviving alone on the streets as a penniless bum.

The man accepts the bet and walks through Los Angeles’s streets only with his clothes and nothing else.

Initially trying to satisfy the most basic needs, the hungry man wanders alone, searching for food and shelter to live.

However, he very soon familiarizes with some derelicts offering him their friendship and their help despite being poor like him.

Slowly the man will rediscover the actual values of life, the company of people, and, in the end, even love.

Life Stinks is an irresistible comedy of the past set in a modern context. Full of hilarious gags and characters who live on the margins of society, paradoxically happier and more carefree than the moneyed, cruel, and ruthless businessmen.

A cinematic incarnation of the old saying, money does not make happiness. Indeed, their poor’s simplicity and madness warm even the most cynical and experienced heart.

This excellent movie is written, directed, and performed by a superlative Mel Brooks. He one of the greatest comedians of his generation and indeed one of the best in cinema’s history.

His transformation from an impassive businessman to a bum is unforgettable, along with the bums’ ecosystem accompanying his story.

A cheerful company of actors on which the dirty but enchanting smile of the beautiful Lesley Ann Warren stands out.

A woman wholly abandoned by society, family, colleagues, and former friends repudiates her, but still proud, free, and independent.

She can find happiness in the little things and ordinary daily gestures that many do not value, opening the heart of the rich cynic who perhaps lives thanks to her for the first time.

Life Stinks was one of the most influential movies of the 90s. A comedy suitable for everyone and still alive today more than ever.

A story capable of making people smile and think, reflecting on the frenetic modern world that is increasingly interconnected but populated by many people alone, stupid, and soured by their wickedness.