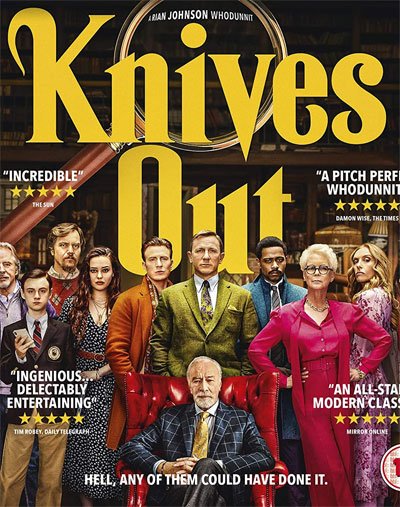 Knives Out begin with the death of a wealthy writer and publishing businessman shortly after a family dinner.

Although found in his bed with his throat slit, the police unequivocally verify that it is suicide.

But a private detective, called to the crime scene after a mysterious anonymous invitation, disagrees with the version of events.

Then begins an extended investigation of every single member of the seemingly united and happy family, full of successful men and women pillars of society.

But behind that superficial patina hides a world of grudges and weaknesses that make each of them a possible murderer with a definite reason to cause the older man’s death.

A classic Agatha Christie-style crime, where a brilliant detective investigates a large group of suspects, each of them plausible as a murderer.

Knives Out is a compelling story, combining the investigative side brilliantly with comedy and personal dramas. A movie full of brilliant dialogues and an intelligent narrative plot narrated with the right timing.

The cast is fantastic, each with its right space, above all Daniel Craig in the smart detective’s role.

At first silent and aloof, the man is unconvinced by the crime timing and the various family members’ statements.

Three sons of the wealthy death man who seem to get along only to fight fiercely shortly thereafter. Finally, however, they join together against a common target that will threaten their legacy.

Apparently not interested in money is Chris Evans‘s character, the reckless son of the nest, observing with detached amusement.

The young Ana de Armas is pretty and funny in the nurse’s fantastic character. Pathologically unable to lie, she will be forced into many subterfuges, always followed by the brilliant detective.

Last but not least, the great Christopher Plummer in the role of the victim. The multi-talented businessman is disappointed with his children, unable to live without his money and support.

Rian Johnson is still confirming as a great author. Directing and writing this movie in love with the great investigative classics, making it a modern success movie.

A story that one minute at a time crumbles the facade of composed education and seriousness of a wealthy family. A slow decade inevitably will bring them to become squalid vultures waiting to feed on the remains of their father.

Knives Out was a huge success worldwide, in a period that is certainly not easy when admissions to cinemas are minimum due to the pandemic.

A deserved success for a magnificent and fun entertainment movie suitable for young and old and to be seen with joy alone or with friends.