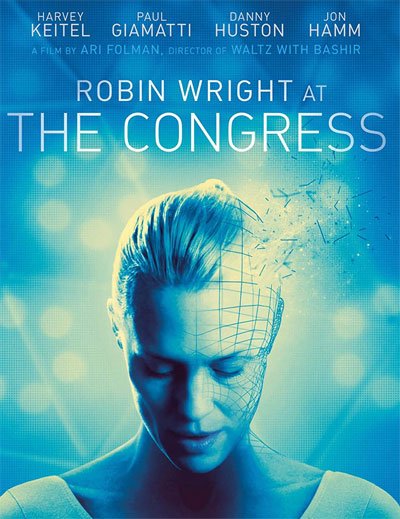 The Congress is a science fiction story starring Robin Wright in the role of herself. Without working for years, in addition to the deteriorating health of one of her children, she needs fresh money.

When production studios offered to hand over her digitized image to exploit her as the lead in their films endlessly, she is initially reluctant.

So the woman accepts the scan to make her become an immortal digitized actress, ending abused in bad films that she would never have done.

Years later, on the eve of the contract’s expiration, the woman goes to a congress, where she has to inhale an unknown chemical substance before the entrance.

She will awaken in a world of imagination in the likeness of a cartoon, able to mold reality to her desires in an apparent infinite paradise.

But the magnificent fiction won’t last forever. After many years, indeed, her desire to see family again will awaken the unstoppable desire to return to reality.

The Congress is a sweet poem combined with a terrible dystopian nightmare, half movie, and half animation.

A story set in a future where humanity blissfully lives in a chemical lie, perpetually deceived by their minds. In this world, men can only be addicted to their dreams or accepting their lonely but real dying civilization.

Robin Wright works hard as a more mature actress, taking on the meta cinema challenge of playing herself.

An aged star’s role is a harsh criticism of cinema’s artificial world. Unable to accept aging and decline, following the illusion of being forever young.

The actress doesn’t make easy choices by always presenting herself as the beautiful and the good in every situation. Indeed, she plays an imperfect woman who doesn’t always make the right choices for the right reasons.

Finally, Paul Giamatti, in a small but crucial role, adds extra emotion to a very intense story. Playing the actress’s family doctor, the man will be the only constant over the years for the actress and her children.

Ari Folman writes and directs an incredible sci-fi fantasy, real and cruel to its characters and still delightfully romantic.

The cast immerses entirely in their roles, and the cartoon sequences are magnificent, closer to Salvador Dalí style than to modern animated movies.

This surreal and elegant drawing frames perfectly an inextricable personal drama. The epic of a mother who does not want to surrender to forces impossible to fight.

Although critics appreciated it, The Congress did not have commercial success in cinemas, unfairly snubbed by large international distribution.

In conclusion, a movie I recommend to all those who love to dream and think. Reflecting on the human species’ destiny, wondering if our qualities will ever prevail on our darker sides.