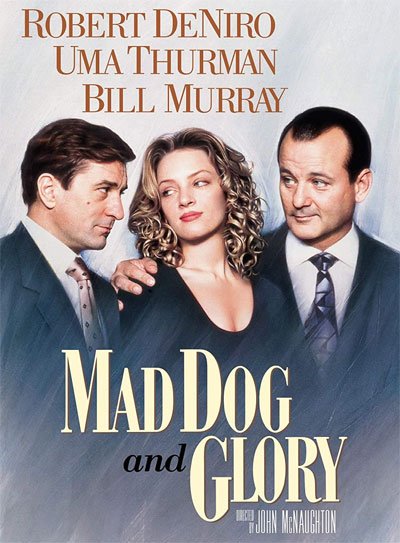 Mad Dog and Glory is the story of a complicated relationship between a mafia boss and an honest cop.

When the latter saves the criminal’s life during an ordinary robbery, the other feels the need to repay. Indeed, he gives him the company of one of his most beautiful girls for a whole week.

For the man, separated and living alone for years now, the girl brings joy and light back into his life. As for her, finally free from slavery for a few days, it’s a change representing a point of no return.

So when the deadline expires, she no longer wants to go back to the criminal. Then the friendship between the two will become a war involving their friends and colleagues.

Mad Dog and Glory is a sweet crime comedy about the fragility of seemingly strong characters on the outside. A delicate and romantic story where even the criminals’ cruelty must give way to the need for feelings.

Bill Murray is ironic and amused by his role as a villain. A boss of a gang of rude and ignorant characters who feels alone and isolated because of his intelligence.

But when his friend denies him respect, he reacts with anger for a betrayal, he does not consider forgivable.

Robert De Niro gives a different performance of his acting skill. Always perfect in the lead role, here as a more modest, shy, and calm character.

A man always avoiding trouble and for once fighting for the girl he has fallen in love with and without cannot longer lives.

As usual, Uma Thurman is beautiful and equally convincing in her role as a rented woman, changed hands by the criminal like any other property.

When she tastes free life after so many years of abuse and fear, she realizes that she can no longer go back to being as before.

Finally, a small role for David Caruso as a cop ready to fight with criminals without hesitation defending his friend.

A movie by John McNaughton, the director of famous Henry: Portrait of a Serial Killer. This time in charge of a lighter and romantic story with the right irony and tenderness with never banal characters.

Mad Dog and Glory failed with the public, as with other movies that I love and often recommended.

So it’s up to you choose to give it a chance trying to appreciate what others, over the years, have instead snubbed or even despised.