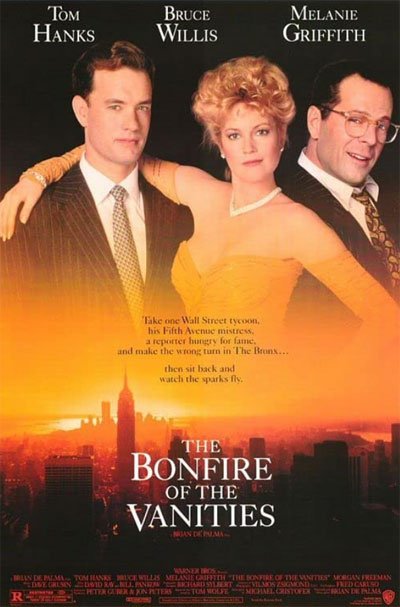 The Bonfire of the Vanities tells an intricate weave beginning with an ordinary car accident.

A wealthy businessman’s mistress runs over a slum boy as driving his luxury car.

Around the case arises a media and political chaos full of people looking for clamor and easy money.

Shortly, everyone tries to take advantage of the situation, from a clergyman using the victim’s mother to raise a riot to a prosecutor candidate for mayor who advertises himself suing a wealthy white man.

Lawyers and journalists besiege the defendant day and night. Led by a reporter who sees the case as a work opportunity, he never finds peace or be alone.

Finally, he realizes the only way to get out of that infected mess intact is to lie and play dirty. Otherwise, the law inevitably takes away his job and marriage and sends him to jail for life.

The Bonfire of the Vanities is an irresistible tragicomic epic with a democratic Kafkaesque flavor. Indeed, despite being rich, the protagonist is defenseless against oppression by lawyers and mass media.

Tom Hanks made a superb interpretation for one of the best roles of his career.

Confused and bewildered, the actor interprets the tragedies that rain down on him relentlessly in a superbly comic way.

Bruce Willis is also hilarious as the face of the heartless mass media. The first to get him in trouble with is journal articles and the one who will ultimately help him in the courtroom giving him fundamental evidence.

The court is presided over by the great judge played by Morgan Freeman. Tough and ruthless with lawyers but also the only officer with a heart and a conscience.

Its exact opposite is instead the character of F. Murray Abraham, a prosecutor comically anxious to blame the man at all costs, bribing witnesses and lawyers without hesitation.

Finally, Melanie Griffith, in the role of the pretty but nasty lover, is lovely and immoral at the same time. Absolutely determined to denies the responsibility at any cost, even she was the real culprit of the crime, causing the man a lot of trouble from the beginning.

The director Brian De Palma creates the funniest movie of his career. A bitter but hilarious metaphor of a judicial system. deaf and blind to truth and justice, always losing against personal interests and money.

The Bonfire of the Vanities is one of the best films of the 90s, albeit with disappointing receipts and reviews from critics.

A rare pearl to rescue, summarily cleaned of unjust criticism and enjoyed in its impressive and indisputable quality of virtuous entertainment.