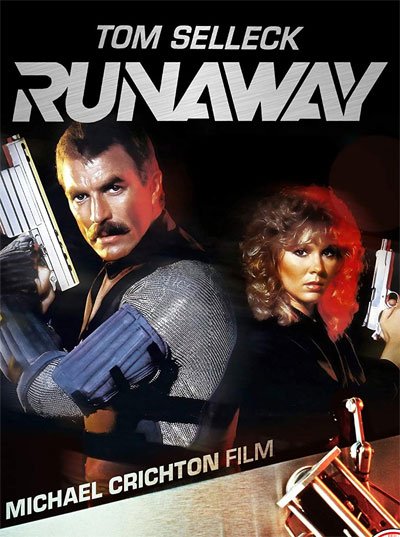 In the near future, the police will select police officers to deal with the so-called Runaway, defective robots doing damage on the property or even being dangerous to humans.

A veteran sergeant of the service, flanked by a young recruit, must investigate some defective domestic robots cases, even killing their owners.

Tracing some illegal chips to some researchers involved in the incidents, the man attracts a mysterious killer armed with the highest technology.

Trying to recover the precious schemes to build his terrifying robots, the psychopath will start an open war with the policeman, threatening his family to continue his business.

Runaway is a fascinating sci-fi crime movie full of ideas that were ahead of the times. Small objects and gadgets now have become real technology in everyday use in our smart homes.

The purely entertainment and investigation part is also excellent. A classic killer’s hunt by the policeman then becomes prey blackmailed by the madman.

Tom Selleck is the undisputed protagonist of the whole story. A Sergeant with a troubled past who, ironically, moved to the Robot section to work more quietly.

Once called into action, he will not hesitate to risking his life and, involuntarily, then also that of his son.

At his side is the blonde policewoman Cynthia Rhodes, who just arrived at the department after many secondary works.

Leaving her ballet roles in Dirty Dancing and Staying Alive, she plays a modern action woman. A cop with much to learn but still helping his partner worthily when alone at war to save his family.

Finally, the famous Kiss singer Gene Simmons is perfect in the role of the story’s villain. A smart, unscrupulous killer equipped with poisonous mech-spiders and pistols with auto-seeking projectiles.

Michael Crichton is always brilliant at directing and writing. He makes a fascinating, believable world dealing with our near-future themes in his unique and inimitable style.

Runaway is one of the best sci-fi action of the 80s, even it was, unfortunately, a box office’s failure.

Indeed, the movie was overshadowed by same year’s blockbusters such Terminator, Ghostbusters, and Sergio Leone‘s immortal Once Upon a Time in America.