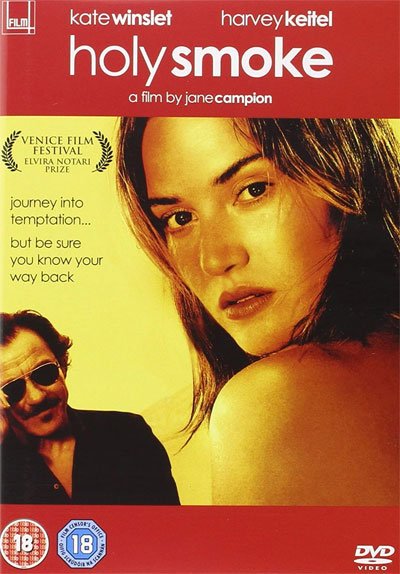 Holy Smoke protagonist is a man expert in the psychological recovery of people with difficult personalities.

A family relies on him to look after their daughter, who joined a religious sect straightaway returning from a long journey to the Far East.

Taking the girl to an isolated house away from everyone and everything she knows, the man slowly begins to understand her point of view.

Initially, he seems to bring her back to her everyday life among the friends and relatives she knew. He tries to make her listen, replying to all the beliefs tenaciously rooted in her psychology.

But at some point, the man’s impenetrable armor cracks, and the girl slowly begins to take him to her side.

Both strong spirit with unshakable convictions, inevitably doomed to the collision from which one of the two will come out in pieces.

Kate Winslet is excellent and gorgeous as a girl who believes she has found the right path enlightened by wisdom.

Forgetting the romantic naivety of other characters such as the Rose from Titanic. The actress plays a tough girl who does not retreat, deaf to what does not conform to her ideas.

Harvey Keitel is even more extraordinary in his transformation, initially ironic and contemptuous of her. Unfortunately, later falling madly in love with her independent spirit and reasoning devoid of logic and meaning.

Jane Campion directs a no holds barred man/woman fight with great class, aided by her sister Anna in the script.

The dialogues between the two protagonists drive the whole story, with drama and a bit of comedy. Two great actors embody the whole story’s beating heart, dragging to take one or other parts.

Holy Smoke was released in theaters in 1999, obtaining critical acclaim but snubbed by the box office audience.

However, despite the money, it is a beautiful romance/fight between two outsiders who struggle to overwhelm each other with their personalities. An atypical movie for the new generations to discover.