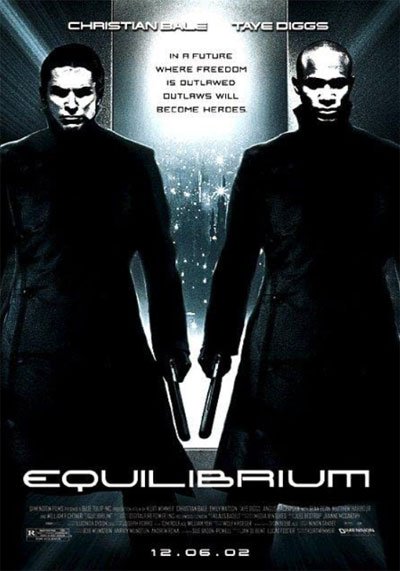 Equilibrium is a story of humanity’s remains living in the city-state of inflexible rules after surviving a nuclear holocaust.

Any emotion is banned because of is considered a legacy of a past that has led man to ruin.

But a handful of rebels refuse to take the mandatory tranquilizers that narcotize the rest of the population.

To maintain total control over the population, they train a special elite of warriors in the martial and invincible use of firearms.

When the best of these soldiers begin to think and have emotions of their own, he will take the rebels’ side.

In an open war against his former colleagues, he will fight the monarchy’s heart of the established power.

Equilibrium is an excellent blend of social science fiction and wild action movie. A story that is very close in philosophy to François Truffaut‘s Fahrenheit 451, along with exciting John Woo‘s like shooting action.

Christian Bale demonstrates all his talent in outstanding acting performance. The story lives with his intense suffering gaze in addition to an excellent physical elasticity in the exciting action scenes.

Initially, he is an indifferent government official, killing dozens of rebels in a raid without a blink. But slowly, the tranquilizers begin not to affect.

Then his eyes begin to leak the all-life repressed feelings, deeply shaking his conscience. Until he no longer denies having to fight the system in which he has always lived with all his strength.

His transformation from a merciless warrior to a revolutionary begins when he meets the beautiful Emily Watson.

A free woman of a culture caught in a raid and later interrogated because she was the rebel’s leaders’ lover.

Initially been close friends, the two men’s different fates inevitably lead them to a spectacular final duel to the last bullet.

Kurt Wimmer directs his best movie ever. An extremely rare and enjoyable action sci-fi set in a dark dystopian, but still believable, terrible near future.

Equilibrium, released in theaters in 2002, was a big commercial failure, grossing much less than its production costs.

Yet many fans have re-evaluated it over the years, elevating it to a small generation cult status. Be that as it may, in conclusion, it certainly remains one of the best entertainment films with Christian Bale.