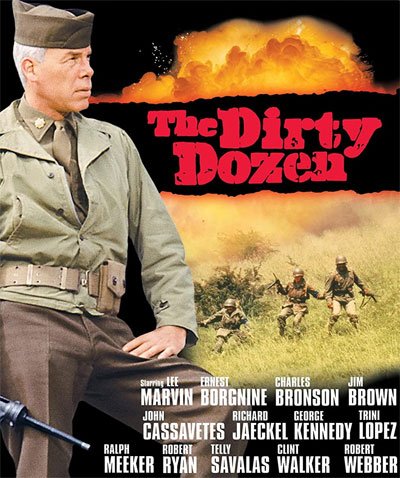 The story is simple: an Army Major has to assemble twelve lifers to exterminate a castle full of Nazis.

The criminals initially band together against the Major, whom they see as a common enemy. Refusing to obey orders, they see the mission only as a momentary vacation from prison.

However, during a series of exercise maneuvers, the men find themselves as brothers. When a Colonel begins to target them as dirty soldiers, they finally recognize the Major as their leader.

Indeed they will have to prepare themselves physically and psychologically for an impossible job. A one-way ticket to the grave to redeem the mistakes that led them to prison.

A funny adventure movie with a bunch of dirty thugs succeeds in what the best-chosen soldiers could not do.

The Dirty Dozen is an entertainment parody of military life and its excessive and oppressive regulations. For once, dirty criminals have the opportunity to be heroes for a day.

A squad of troubled soldiers played by a stellar cast, led by the superb Lee Marvin. A tough soldier also does not always follow orders by the book and makes his superiors crazy.

The man will have a hard job putting the unruly convicts in line, among them the grinning thug played by John Cassavetes.

Initially reluctant to participate in the mission, the man later became friends with others, including the clever Charles Bronson and the more cheerful and upbeat Donald Sutherland.

Released in theaters in 1967, The Dirty Dozen was a resounding international success and well above the expectations of what intended to be a typical war movie for the general public.

A movie that is a milestone in cinema’s history strongly suggested to the youngest who may not have had the opportunity to give it a chance until today.