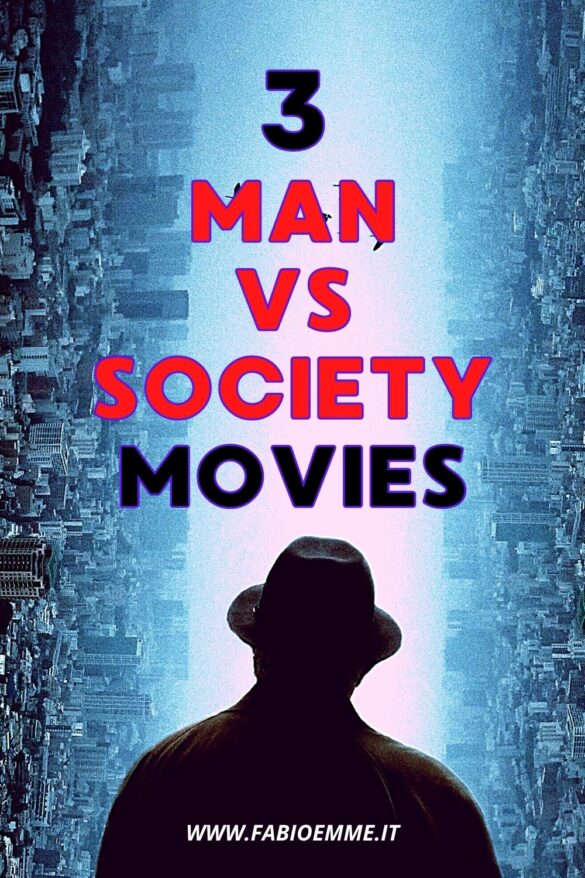 Society is never perfect, indeed for the wrong people in the wrong place can be an atrocious and inevitable dictatorship.

3 Man vs Society Movies that you may have missed over the years that are a must-see.

John Q is an ordinary man. He does a humble job in an economically difficult period, managing to support his family with dignity.

But one day, his baby feels sick, and after taking him to the hospital, she discovers that he needs a heart transplant.

With much difficulty, the man manages to raise the enormous sum of money necessary to pay for the surgery, only to discover that the doctors do not intend to perform it anyway.

Finally, seized with anger and helplessness for his child, the man kidnaps a group of people into an emergency room.

When the police surround the hospital, the man dictates his conditions: he will kill someone unless his son receives a new heart.

John Q is a dramatic parable of an ordinary man exasperated until the terrorist attack. When society’s laws leave him no choice, the only alternative to save his family is madness.

Denzel Washington is excellent in the role of a modest and hard-working father. He slowly gets carried away by despair and doctor disinterest until he turns into an armed kidnapper.

Many can identify with this character fighting the bureaucracy’s stupidity. A deathly machine combined with the greedy world of money leaving entire families without hope.

As usual, James Woods is hilarious even if in the role of an immoral doctor who, as the first diagnosis to his patients, analyzes their bank account.

Even outside the hospital, we have conflicts between the mass media competing for the case and between the policemen surrounding the emergency room.

Cops divide by the lieutenant’s side, the old and wise Robert Duvall, arriving first and dealing to solve the conflict.

Against him, his captain played with an evil smile by Ray Liotta, who would like to solve the problem quickly using force.

Nick Cassavetes is a guarantee as a director for a great entertainment movie, also intelligent and cruel in its themes.

John Q exit in theaters almost 20 years ago. Sadly, still current in the harshness of a world devoted to money above all else.

A movie to be rediscovered for the youngest and certainly worthy of being the first of these 3 Man vs Society Movies.

A terrorist kidnaps a young girl with a tragic past after attacking the television studio where she works.

The man intends to blow up the parliament precisely in a year, during which the girl must stay with him.

In the meantime, the authorities exasperated by the terrorist attack, try tracking him down and protecting the dictatorial regime that dominates British citizens’ lives.

During the forced coexistence, the girl develops deep respect and attachment to the terrorist, convincing herself of his ideals of justice and freedom.

As the date of the explosion approaches, the two soon become inseparable, telling each other their personal stories that have a lot in common.

A movie inspired by Alan Moore’s comic is a tale of adventure and freedom, reversing good and evil roles between police officers and terrorists.

V for Vendetta is an explosive action tragedy that condemns all dictatorships in history. Where the leaders hide behind the guards’ shields from the bloodthirsty crowds who want to oust them.

Hugo Weaving is excellent in the role of V, acting in disguise all the time. The actor manages to make his character epic with his body mimic and his deep evocative, ironic and passionate voice.

In his time, the man was unjustly a state prisoner on which they conducted experiments, now thirsting to raze the established power.

At his side, the beautiful and talented Natalie Portman, a naive and young victim of the system. Forced by V, she will have to face her parents’ deaths before she can finally move on.

Finally, John Hurt is superb as the evil High Chancellor, supreme leader of the totalitarian regime oppressing his country.

A man with a heart of stone and a black soul willing to do anything to maintain his absolute power. Even staging, with secret service help, false attacks to terrorize the population and make them malleable to his will.

The movie was written and produced by the Wachowskis sisters and directed by James McTeigue. Undoubtedly, the best known of these 3 Man vs Society Movies.

Disowned by Alan Moore, who did not like too many differences with the original work. V for Vendetta had ample success with the public, also receiving numerous awards from critics in the international arena.

Captive State begins with the aliens arriving on earth, and our armies tried to fight them, failing. So now the whole of humanity is subjected to their laws and their will.

An underground base protected by strict security measures to which only the police commander has access. An impenetrable fortress from which invaders maintain their dominion on population.

A young boy is unwittingly involved in the plot, as the brother of one of the resistance members. Despite being reported dead long ago in a violent alien terrorist attack on the rioters, resistance was still alive and active.

Escaping from one end of the city to the other, he run by both the rebels and the police, realizing very soon that he has no way out.

Captive State is a commendable example of an Orwellian dictatorship with total control over its citizens. A scary world where every person lives in fear of risking death or deportation to unknown extraterrestrial locations if they were rebelling.

A political metaphor on the inhuman restrictions of a dictatorial regime intelligently transposed into a sci-fi thriller movie of great entertainment for the public.

Of all the actors in the notable cast of history, John Goodman stands out for his outstanding acting performance.

A policeman in a moral struggle about his duty, relentlessly hunting the rebels in order to prevent their attack.

Ashton Sanders, instead, is a young who only wants to flee to a quieter place with his girlfriend.

Involved by the aliens’ misdeeds on our world, now drained of vital resources by the invaders. The boy soon realizes that not fighting would mean succumbing without a future.

It is remarkable the small cameo of the beautiful Vera Farmiga as number one of the rebels. As a prostitute, the woman organizes the network of contacts and plans its members’ actions up to the final target.

Rupert Wyatt writes and directs an exceptionally paced thriller that is tense and dark until the last minute. A pessimistic story about democracies, yet capable of giving distant hope to the human soul and its struggle for freedom.

Captive State is a movie that unfortunately did not have success and was quickly forgotten, despite its remarkable quality.

An excellent example of social sci-fi, capable of making you think and entertain with style, which deserves its place among these 3 Man vs Society Movies.