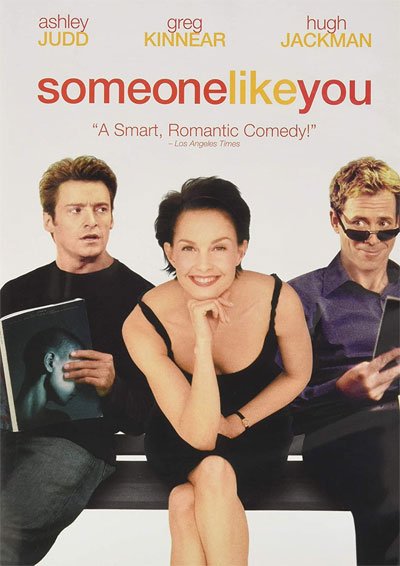 Someone Like You stars a young girl who works for a well-known talk show host. But secretly, she’s also her man’s lover.

She suffers after being dumped by him when believing the man wants to leave the woman and live with her.

Then she only wants to forget and moves into an apartment with a young colleague, a womanizer sex-addicted alpha male disillusioned with love.

One day she comes across an absurd article comparing women to cows abandoned by a bull after mating, suddenly having a brilliant idea.

By inventing a famous psychologist’s fictional character, she sells the old cow theory with immense success among the female audience.

But when her employer absolutely wants a meeting with the nonexistent doctor, the girl finally reaches a point of no return from her lies.

Someone Like You is a fun rom-com full of confused and lost characters about their feelings. Yet confident that they fully understand life, keep making bad decisions messing up their situation further.

Ashley Judd is cute and joyful in dealing with problems, funny and exuberant even when tears run down her cheeks.

The girl puts all herself into her fake psychologist’s character to cure her pain and disappointment. So she’s almost surprised finding an immense audience of women who follow her without hesitation.

As her roommate, Hugh Jackman is the only one who manages to keep her anchored to reality. Trying to be cynical about feelings, eventually falling in love with her innocent naivety of a simple girl.

A man who also has behind a badly ended love, initially sure that he can only have occasional pleasure and nothing lasting and deep from women.

Greg Kinnear in the role of lying lover is just as ridiculous. A shameless cheater devoted only to his own satisfaction, regardless of using people and then throwing them away.

Equally bright, Marisa Tomei as the protagonist’s best friend, together with the wise and older Ellen Barkin as her boss. Two characters trying to advise and help her without knowing the fictitious double life she is leading.

Tony Goldwyn directs this pleasant mix of good feelings and deceptions, leaving the right space for all the characters. An ecosystem working together and knowing almost nothing about each other, focused on their own personal micro dramas.

Someone Like You is a 2001 movie not too successful at the box office, grossing just than its production costs. Yet it remains a fun and relaxed rom-com about sex and feelings to watch alone or with a partner.