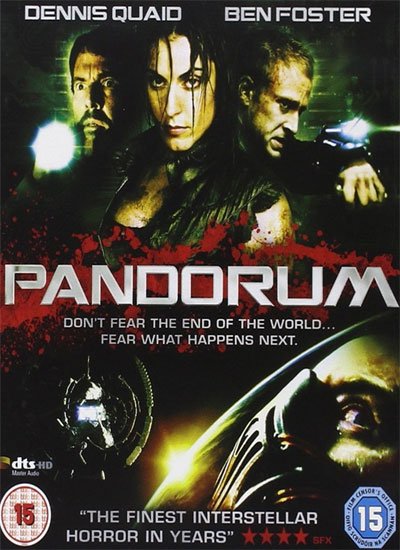 In a distant future where long interstellar journeys are now a reality, Pandorum is the name of a disease that afflicts astronauts in space.

A disease due to prolonged travel isolation periods leading to progressive dementia and total psychological and emotional instability.

Waking up after a long sleep in hibernation, a young technician finds his entire spaceship under siege by humans completely maddened by the Pandorum.

In addition, with the armored doors locked, he needs to reboot the spaceship’s engine before it explodes, killing everyone.

He will have to fight with all his might an entire crew of mentally ill, cannibals and furious armed killers. Only an older officer and two survivors he meets along the road try help him.

But his way to the heart of the ship will be full of traps and deceptions.

A claustrophobic and hallucinating space journey where everything could go wrong ended up going even worse than expected.

Ben Foster is the protagonist awakened after the long cryosleep, dazed and unable to understand what happened in his absence.

While trying to save the ship, he also tries to understand how a colonization mission could have become a living hell in space.

He can count on the wise and expert Dennis Quaid. The man is the first person he meets when he wakes up, also lost and helpless like him.

However, a man does not seem to want to tell him everything about what happened on the spaceship, keeping precious and vital secrets for himself.

Finally, the fascinating and dangerous Cam Gigandet. An officer with evil and charming smile, seeming amused by the chaos that reigns supreme on the ship.

Christian Alvart creates a sci-fi/horror atmosphere that works and fascinates. Perhaps too frenetic in the action scenes, but always well centered on the characters and their absurd situation.

Pandorum is a likable entertainment movie of 2009. A story with themes and topics already seen but still deserving his slice of the love of interstellar travel enthusiasts.