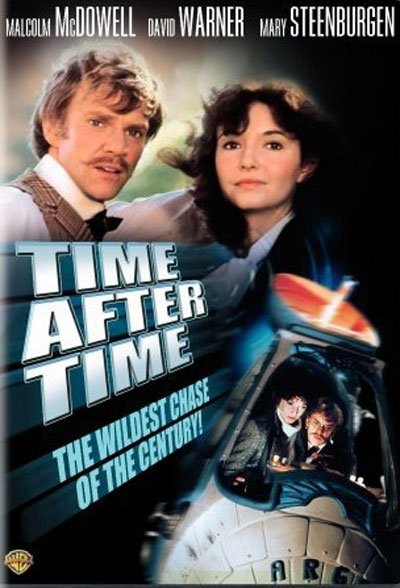 Time After Time begins with the famous writer H.G. Wells spending the evening with some of his friends.

Seeing them skeptical of his theories in The Time Machine book, he shows actually created one in his basement.

Suddenly the police break into his house, sure to find the Jack the Ripper there thanks to some unequivocal clues.

Returning to the basement, the man discovers with horror that the killer fled into the future thanks to his invention. The writer will have no other choice to travel through time and hunt down the fearsome serial killer.

Entertaining and original sci-fi movie with charming historical figures and the time machine into an improbable but fascinating plot.

Malcolm McDowell is the positive protagonist of the story for once. Usually in his acting career relegated to villain roles, after the famous A Clockwork Orange‘s international success.

The actor gives a pleasant presentation of H.G. Wells. An open-minded man of great imagination and enthusiasm, amazed by the technological innovations of the future.

Meanwhile also able to find the love of a young bank employee, played by Mary Steenburgen. Accepting his true identity without problems also help him fit into modern society.

David Warner glacial and scary as the infamous never captured Jack the Ripper.

A psychopath at ease with the modern social indifference rather than its own time. Immediately starting to claim victims and trying to establish a truce with the writer, before facing him in an unavoidable duel to the death.

Nicholas Meyer directs this little sci-fi gem with the right amount of irony and involvement. A story with its strength in its characters, rather than the credibility of a plot that is actually not very plausible.

Time After Time is still one of his best films of the 70s, perhaps forgotten too quickly after the success of his next Star Trek: The Wrath of Khan.

An original tribute to the great writer who made us dream with his books and the terrible murderer who still recurs today in our collective imagination.