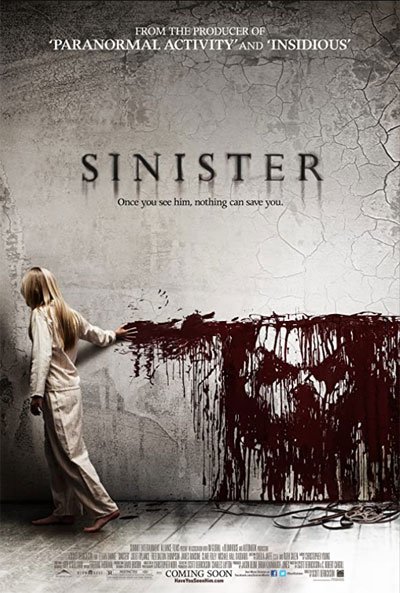 Sinister begins with a writer in crisis who, after a successful book, hasn’t written anything of value for years.

So he decides to move to a house that a short time before was the site of a terrible massacre.

A mysterious killer hanged the whole family from the big tree behind the property, while the youngest daughter disappeared into thin air.

As soon moving into the house, the man finds a series of slides in the attic showing other murders involving other families decades ago.

Convinced that he has discovered a serial killer, the man begins to investigate, hoping to return to writing a successful book finally.

The cast of the small family, the main protagonist of the story, is perfect. Above all, the father played by Ethan Hawke.

A man victim of writer’s block finding his last chance to return to success finding the killer of the mysterious series of murders.

Therefore, even if frightened for his family by the horrors in the discovered slides, he’s unable to stop and give up his story.

Juliet Rylance is also distinct in the wife’s role. Initially enthusiastic about the new beginning, then angry with her liar husband and worried about his children.

Even seemingly marginal in the story, the two kids will be the unknown diabolical force’s main target.

Unfortunately, the director will not be present for the disastrous Sinister 2. An absolutely useless sequel for a perfectly self-complete story like this.

One of the best horror films of recent years. Absolutely suitable for everyone who may have missed this smart and modern cruel fairy tale.