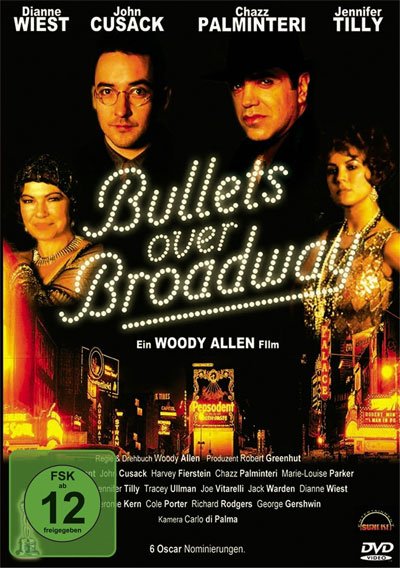 Bullets Over Broadway begins with a writer and his producer trying to bring a play to the theater. Without money, they’re forced to seek help from a crime boss.

In return, the man agrees but demands that his girlfriend, a stupid and untalented actress, play the main character.

The actors’ rehearsals will be a nightmare for the writer. Unable to be accepted as a leader and with all the cast complaining about his every single narrative choice.

However, one day, a henchman of the boss, protector of his girlfriend, suggests some changes revealing an immense writing talent.

Despite the great enthusiasm of all the actors for the new changes, the boss’ woman’s total inability risks ruining everything.

So the criminal/aspiring writer decides to solve the problem in his own way.

Hilarious epic of a writer who realizes he hasn’t so much talent. Indeed, discovering an unexpected great artist in a thug and murderer.

John Cusack perfect in time and the mimicry as a leading comedian actor. Initially arrogant and unable to listen to advice.

Then he will become totally dependent on the criminal when he understands his immense talent and creativity.

A criminal played wonderfully by Chazz Palminteri. In one of the most successful and complete roles of his career, ingenious and ignorant at the same time.

Initially disinterested in the theater, the man will then devote himself to it with all his strength. Even killing to protect his work from the actress’s ineptitude.

Jennifer Tilly lovable and funny in the actress’s role, recommended and incapable and ignorantly the main pivot of all the turning points of history.

Woody Allen writes and directs one of his best plays, smart and entertaining, without being present as an actor like many other times.

An act of love towards theater and cinema, innate and acquired talent, and finally, for an era of elegance and refinement that no longer exists.

Bullets Over Broadway remains today one of the best American comedies of the 90s and one of the brilliant and neurotic director/actor and screenwriter‘s best works.