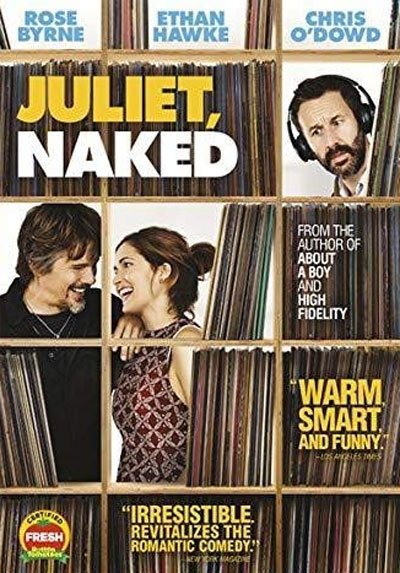 A woman has been living for years with a man obsessed with an old retired rock star legend.

One day, he receives an unreleased piece called Juliet Naked, instantly loving this song. The woman, disagreeing, writes angrily on the partner’s forum and the same disappeared rock star responds.

Agreeing on the insufficiency of her man’s opinions, the two become friends beginning to write regularly. Therefore, when the opportunity arises, they decide to meet in London.

Looking close at his relationship with his family, the woman discovers a very different man from his fans’ mythical legend.

Delicate romance comedy about music and the myth of the stars against their real and fallacious humanity.

Rose Byrne pretty and gentle in the role of the protagonist. A woman insecure and apparently succubus to her man’s mad music fixation.

When she finally stops indulging him, the woman begins to discover herself and starting a new happier life.

Ethan Hawke is equally solid and friendly in the fallen rockstar’s role, a man with a complicated past. On many occasions, selfish and stupid, indeed also protective of his youngest son, always lived with him.

Free from his role as a myth healed by the crowds of years before. For this reason, Precisely more peaceful than during the days of his legend, which led him to countless wrong decisions.

Chris O’Dowd hilarious in the adult’s role who admires the old singer as a stubborn kid who never listens to his woman. Even when he meets him, finding more skill and talent than he actually recognizes in himself.

Juliet Naked is an attractive carousel of situations that brilliantly manages to leave us in the end with a melancholy smile on our lips.