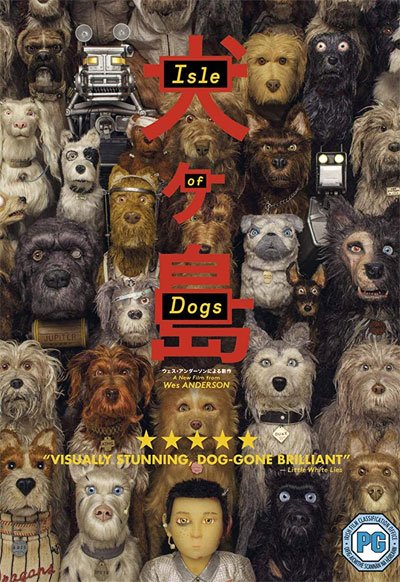 In the future, the large landfill on an island near the city of Megasaki becomes an Isle of Dogs.

Affected by a terrible epidemic, all the city dogs are confined during the search for a cure.

A small child, son of the powerful boss and mayor of Megasaki, illegally lands with his airplane on the island.

Helped by 5 dogs, who formed a small gang to survive. They will try to find the child’s dog, the first to have been deported six months earlier.

Animated comedy easy narrating complex topics and historical appeals on intolerance, dictatorship, and racism in light tones. All in all, with a unique and inimitable style.

Perfect the realization of the Japanese style and aesthetics wherever the location is set. Elegant and refined from the citizens’ elegant houses to the most fetid sewers of the landfill.

It very well built the group of dogs that help the child, among all the wild and stray Chief.

A dog has never been in a family, except for a short time, therefore suspicious and disillusioned with human beings.

In addition, the other 4 dogs are more jovial and devoted. With the cast of voice actors’ excellent voices with Edward Norton, Bob Balaban, Jeff Goldblum, and Bill Murray.

Finally, Koyu Rankin is also good at giving voice to the boss’s son. A not easy role, speaking almost exclusively in Japanese, excepts when try to play with dogs.

Wes Anderson is brilliant in directing and writing this animation comedy. Skilled in transforming his every shot into a rare beauty painting, studied in every detail and always strongly evocative.

Isle of Dogs is an intelligent, funny, and never banal story, always on the side of the weakest and most abused by society.