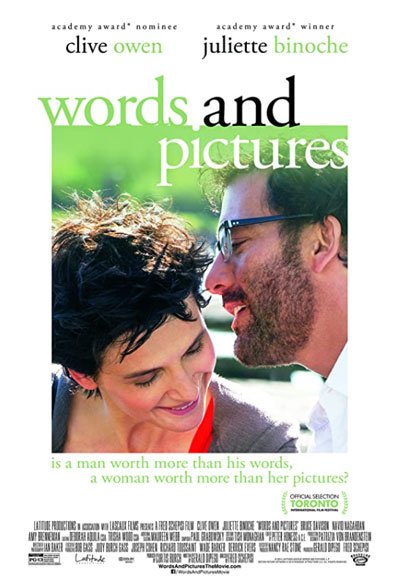 Words and Pictures begin with two teachers starting an unofficial competition and involving the students in their dispute.

The man is a famous writer who teaches literature while the woman is the new art teacher.

Their debate is about whether words or pictures are more effective as a means of expression.

By stimulating each other their creativity and their passion, the two inevitably end up falling in love.

But his alcoholism and her health problems end up driving them away, even though they are obviously made for each other.

Both will have to find out if they can solve their weaknesses or make them worse if together.

Fun romance comedy built with hilarious verbal duets on an interesting theme, a fight between the word’s power against the pictures’ expressiveness.

Clive Owen is hilarious in verbally oppressing all his interlocutors, making fun of everything and everyone with his jokes.

Now separated from his family, even his colleagues tolerate him badly because of his drinking.

On the other hand, Juliette Binoche is a painter who has arthritis, equally fierce in defending her art.

Even suffering from painting, she is happy with the intellectual challenge that gives her a new inspiration to fight.

A romantic fight/relation directed by Fred Schepisi, alternating comedy and personal dramas with the right balance until the end.

Words and Pictures is a non-trivial rom-com that inspires curiosity and the desire to become attached to its characters.