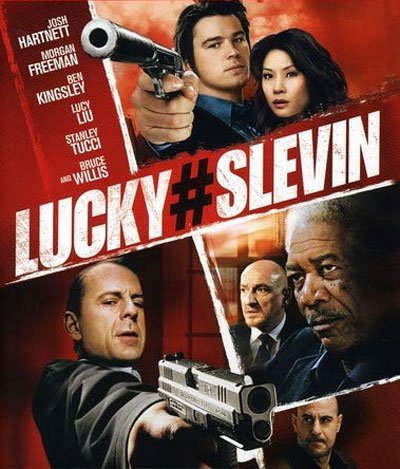 Lucky Number Slevin begins with the young Slevin Kelevra who just arrived in town. Immediately attacked and robbed, he finds himself in the middle of a war between two mighty bosses.

Owing to an unfortunate coincidence, both criminals think he’s someone else who owes them.

At that point, cornered by two gangs of thugs, whatever alternative he chooses will be trapped.

Helped by his pretty neighbor, he will try to get out of the two men’s unacceptable demands. In addition, a mysterious killer is hunting him, working for both the gangs and planning his own strategy around him.

Lucky Number Slevin is a fun and exciting carousel of misunderstandings, situations, and characters.

Many little stories revolving around the protagonist with a great rhythm, superb dialogues, and excellent twists.

Josh Hartnett is the perfect charming face and always ready joke, despite himself repeatedly hit and cornered by bad luck.

In a precarious truce, the two live in their towers facing each other, ready to begin war at any moment.

Lucy Liu, funny and beautiful in the love part of the story, is curious about the newcomer and will try to help by investigating with him.

Finally, the killer played by Bruce Willis is always cool and lethal. Man with a single expression apparently incapable of emotion plotting in the shadows behind the boy.

Directed by Paul McGuigan, the movie ‘manages to combine comedy and crime drama very well into one great entertainment show.

Over the top characters and surreal and intelligent dialogues make Lucky Number Slevin a unique case of its kind, definitely worth seeing for the pulp situation lovers.