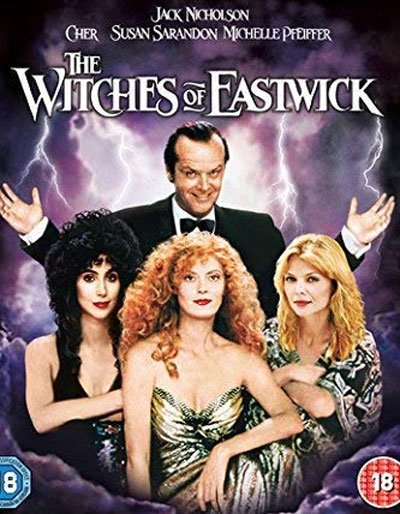 The Witches of Eastwick begins with 3 women who have been friends for life. Each with its regrets and dissatisfactions, women together express the desire that something will radically change their lives.

Immediately an eccentric figure shows up in the city, embodying everything they secretly always wanted from a man.

Intelligent, rich, and full of charm, the mysterious newcomer wins the three women’s trust and love.

But they soon realize having made a pact with a demonic being, capable of anything to give life to his diabolical progeny. At that point, the 3 friends have to fight without rules or prisoners in order to survive and be free.

A story entirely built on the 3 divas playing the witches and the marvelous protagonist and puppeteer of their lives.

Jack Nicholson, indeed, reigns supreme over the rest of the cast that revolves around him, fueling the story’s growing madness.

3 women initially unaware of their own power, repressed by a life they hate and looking for revenge.

Understanding that the man intends to subject them to his will, they react with equal perfidy and ruthlessness.

The Witches of Eastwick is certainly one of the funniest movies of the 80s, still as powerful and unstoppable as it was then.