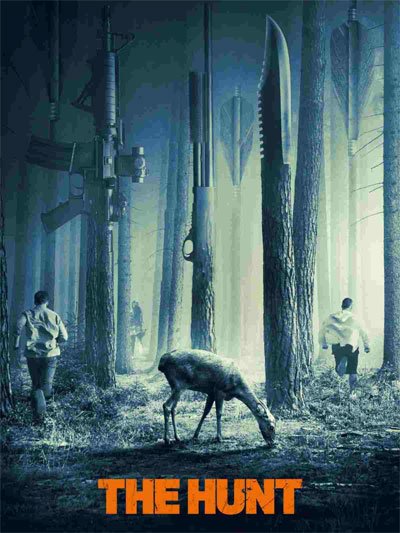 The Hunt begins with a group of men and women wakes up in a forest with no memory of how they got there.

Confused and disoriented, they seem not to know each other and have no idea why someone has brought them together.

But when strangers begin to slaughter them one after another, they quickly realize that they have become human prey for a handful of ruthless hunters.

The hunters soon exterminate the group until only one woman remains. Suspecting everyone, she will escape first and then go back to settle the accounts with the mysterious killers.

A bloody and fun action survival where, at first, it is almost difficult to understand who the protagonist is. Moving from one character to another, we follow a series of victims punctually cut down one by one.

Amazing Betty Gilpin as a victim, overturning the role by becoming a relentless killer.

Ironic and intelligent, she never lets herself be trapped by the deceptions of her mysterious strangers’ enemies.

An unstoppable and stubborn warrior, masculine and aggressive in attitudes as later feminine and beautiful, when we see her as a splendid blonde in evening dress.

As her nemesis, there is also the perfect Hilary Swank, also tough and bad in her role as the hunters’ best killer.

She is the only one to stand up to the protagonist both as cunning and as strength. Thanks to her special training and tenacity equal to hers, up to an exhilarating and spectacular final duel.

Craig Zobel directs this little action jewel, a modern movie that winks at many classics. The Hunt is an old fairy about ancient sentiments and grudges, also modern in its themes treated in the background.

A story still into the present stupid diatribes on social media makes everything fresh and new entertainment movie.

3 Movies about Aliens from the 90s