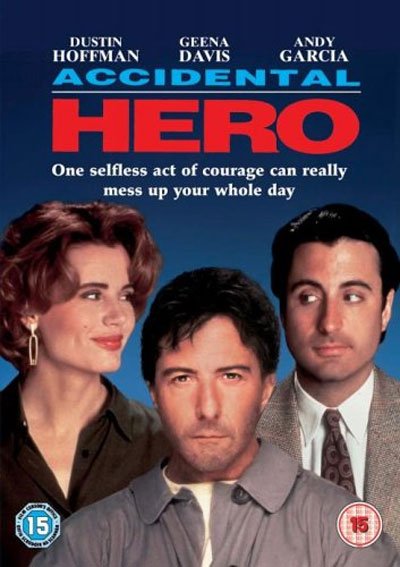 A petty scammer and thief find himself at the scene of a plane crash. Almost accidental, he becomes the hero who saves all passengers.

Confused by the incident, he runs away and is arrested for theft in a major police roundup.

When he later discovers that a famous TV reporter has offered a generous reward to the unknown savior, it is too late.

Another homeless man he accidentally met on the street, in fact, pretends to be him pocketing the money and hailed by the crowds as a hero.

A crackling comedy about the euphoria and bogus feelings of TV and the world of information.

Ready to acclaim anyone in his most courageous moments, just as then to sink them mercilessly when the light of glory fades.

Dustin Hoffman is an awesome clumsy and comedian cheat. However, also human and capable of empathy with her little child.

A man with theft in blood, robbing anyone at any time, such as the people he is rescuing from the burning plane or his own lawyer during the trial.

Geena Davis is also absolutely brilliant as a rampant journalist. Apparently docile and naive, in fact, a tv shark swimming in an already crowded sea of ​​money and scam.

Finally, Andy Garcia, as a fake hero, fed to the media. From a lie, man will then become an inspiration to kindness and generosity for all others.

A funny and intelligent movie from the 90s, directed by the excellent Stephen Frears.

A great comedy of characters that thrives on dialogue and hilarious acting over the top of the whole cast.