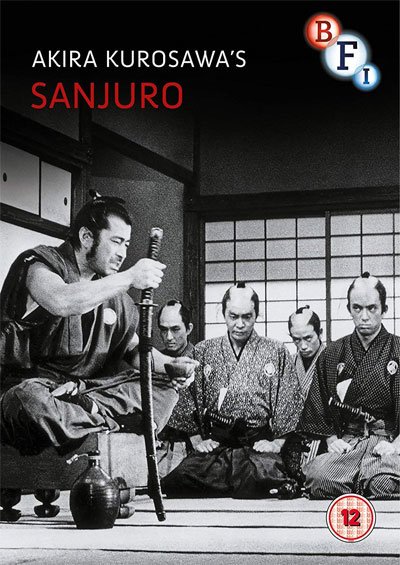 Sanjuro is a skilled and experienced Ronin, a former Samurai without a master. He wanders alone for the country and offering his sword as a mercenary.

One day he meets a group of young and inexperienced warriors, investigating in order to discover suspected corruption within their clan.

Due to their own boss’s betrayal, the young men end up in an ambush. Only the intervention of Sanjuro saves them all, cleverly tricking their opponents and winning the group’s respect.

He immediately realizes that by leaving them alone, they would end up getting killed. The Ronin will lead their mission until they get to the heart of the mysterious conspiracy.

A movie full of action and irony, intelligence, adventure, and nostalgia for certain aspects of that lost historical period.

Toshirô Mifune is an amazing protagonist, sarcastic and cunning in facing his adversaries, first of all, with words and deception.

Simply invincible then in the spectacular duels with the Katana. Like in the theatrical style of the Jidai Geki, old historical dramas with Samurais.

A style homaged by George Lucas by coining the term Jedi for the famous warriors of his Star Wars saga.

A movie directed by the immortal genius of Akira Kurosawa, one of the undisputed masters of cinematographic art.

In addition, this is the sequel to the famous Yōjinbō. Another Samurai masterpiece, remade by Sergio Leone in a western style with his famous A Fistful of Dollars.