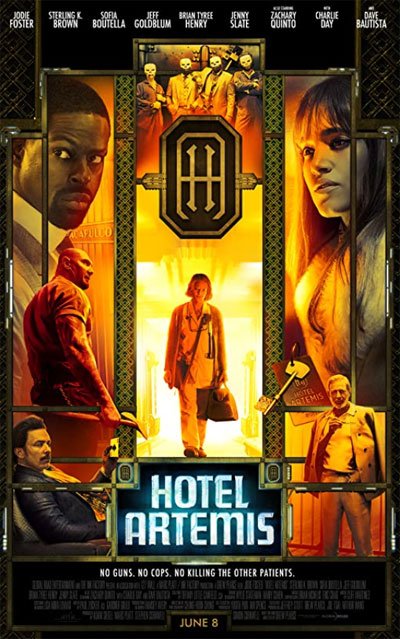 Hotel Artemis is the only place in town where every criminal can find shelter when is injured.

Different characters find refuge in this unofficial emergency room in the midst of a social revolt for lack of water.

Old sympathies and rivalries wind among them, ancient wounds that will reopen in this forced coexistence.

Then one of the most dangerous bosses in the city shows up, almost dying and looking for help. Suddenly the whole situation will fall apart in a total survival war.

An excellent story living on the relationships and clashes between the various protagonists.

A movie set in a dystopian future tremendously similar to our present. A world where, in the light of exhausted people’s lives, popular discontent becomes a revolution.

Respectful cast with Jodie Foster above all, in the role of the doctor with a sad past.

A woman trying to be a peacemaker among the various restless and violent souls in her hotel, supported by the giant nurse Dave Bautista.

Besides, charming the couple formed by Sterling K. Brown and Sofia Boutella. A romantic relationship between two killers, albeit unluckily born in the wrong world and time.

Also interesting the boss played by Jeff Goldblum and his love/hate relationship with his son Zachary Quinto.

Hotel Artemis is a movie written and directed by Drew Pearce, with a great action/thriller rhythm and a very captivating steampunk aesthetic.